Canadian media company Reuters has just announced in its official Twitter account that the National University of Singapore has recently created a new piece of technology that is revolutionary in the electrical industry. 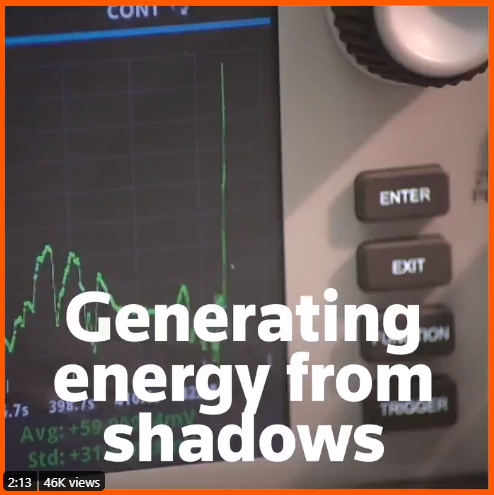 This new technological advancement is able to utilize energy from shadows which, in turn, will transfigure the shadow energy into electricity. Attached to the tweet is a two minute and 16-second video on the matter. The video talks about the new innovation by several scientists from the prestigious Singaporean university.

Dr. Swee Ching Tan, an assistant professor from NUS, stated in the video that, as shown in commercials and advertisements, solar panels are situated in places with open areas. These eco-friendly electricity generators are not to be placed in areas where light does not flow in or places where shadows are always present.

The professor said that this new technology that generates electricity with shadows counter this issue. This innovative product is able to generate electricity in places that encounter many shadows and is always obscured from the sun (or, in this case, light).

According to the video, this new piece of technology by NUS is named the "shadow-effect generator." It showed short clips on how this new innovation was devised and tested and how scientists were able to conclude how to use it properly. The video also mentioned that the shadow-effect generator is similar to solar panels, as brought up earlier.

As one would think, this innovative piece by NUS is the exact opposite of solar panels. This is because of light energy usage for solar panels and shadow energy for the shadow-effect generator.

Read Also: [Viral Video] After All the Controversy Over the Coronavirus, Wuhan China Plans to Build the Tallest Skyscraper Ever

Learn More About the Technology

A phenomenon known as "voltage differences" was discussed by Dr. Tan in the video wherein the lit part and the shadowed area of a space produce a voltage difference. This causes the electrons from the lit area to the dark area which, in turn, generates electricity.

The shadow-effect generator's size is quite small, ranging between a wallet card and a small mobile phone. It is said to be six square centimeters. This device is able to generate a total of 0.25 volts. If one would do the math, 20 pieces of this product can generate five volts. Five volts are sufficient enough to light up a light bulb or charge a person's phone.

The scientists behind this brand new creation see this opportunity as a door opener to more possibilities and innovations in the future. Later on, Dr. Tan mentioned in the video that their shadow-effect generator also has another purpose in their laboratories. The product can also serve as a motion detector.

As the car powered by the shadow-effect generator was being tested in the NUS laboratories by passing over some obstacles, a blue LED light will be triggered and turned on. A second LED light of the color green will also turn on once the car passes by the second obstacle.

For the device to function properly, it must have something above it so that a shadow can be cast over it.

Read Also: [Watch] NASA Updates What Happened In the Past Week: How Are We on the Artemis Program?