Have you ever thought about what an insect's perspective was like? Insects navigate rough terrain and squeeze into unimaginable places. 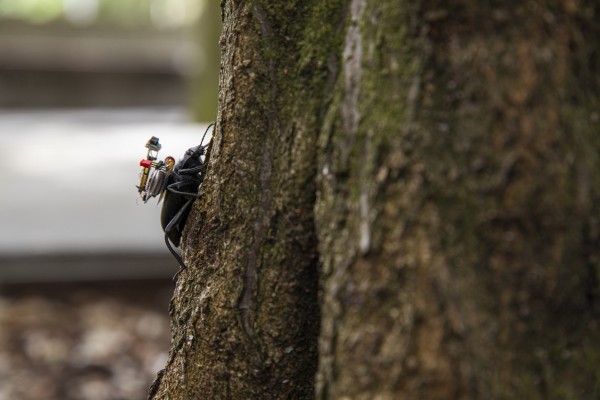 However, it seems that engineers are close to making this a reality.

Seeing Through The Eyes Of An Insect

A team of engineers at the University of Washington has developed a wireless camera that's small and light enough to be mounted onto a beetle's back. You could call it a GoPro for insects.

Their funds came from a Microsoft Fellowship and the National Science Fellowship giving the team a grant of $980,000. These engineers say that they have created the first-ever wireless remote-controlled vision system. The system has a small enough form factor that allows it to be mounted on an insect while also stream video to a smartphone at a maximum of 5 frames per second.

The whole system weighs about one-tenth of a playing card at around 250mg. The battery of the system can last a session where it records images for approximately six hours.

The camera of the system is on a mechanical arm with 60-degrees of motion that moves it to look left and right. It handles capturing high-resolution panoramic shots and tracking moving objects. Whoever controls the camera and arm does so via Bluetooth using a custom smartphone app from a slightly longer distance than a football field.

Read More: Over One Hundred Prominent Twitter Accounts Were Hacked by a Small Group

Beetles Of The Future?

According to Shyam Gollakota, a UW associate professor at the Paul G. Allen School of Computer Science & Engineering that's leading the study, wireless cameras transmitting its feed have been impossible for minuscule robots until now.

Two kinds of beetles were tested on with the wireless camera system, a Pinacate beetle, and a death-feigning beetle. The reason for the choice of beetles is that similar beetles have been found to handle carrying loads that weigh more than half a gram.

Ali Najafi is a co-lead author of the study and a UW doctoral student in electrical and computer engineering. He stated that they ensured that the beetles didn't have any issues while carrying the wireless camera. The beetles could navigate easily over gravel, going uphill, and climbing trees.

Another one of the study's co-lead authors and a UW doctoral student in electrical and computer engineering is Vikram Iyer. He noted that they added a small amount of weight to see if it still kept their motion healthy. According to Iyer, when the beetles were carrying the camera, they could handle maneuvering significant obstacles. The camera systems can also be detached quickly. After they concluded their experiments, they noticed that the beetles lived for more than a year.

The engineers are hoping that the next iterations of the wireless camera system will consume less power and that there won't be a battery needed. They're potentially looking to supply the energy the system requires using solar power, which will hopefully improve the camera system's capabilities.

Read More: PC Owners Might Need to Rewire Their Entire System if the NVIDIA RTX 3080 Ti Rumors Are True