It looks like an update coming to Windows 10 will change a little part of the Start menu that a small few may have even paid attention to beforehand. 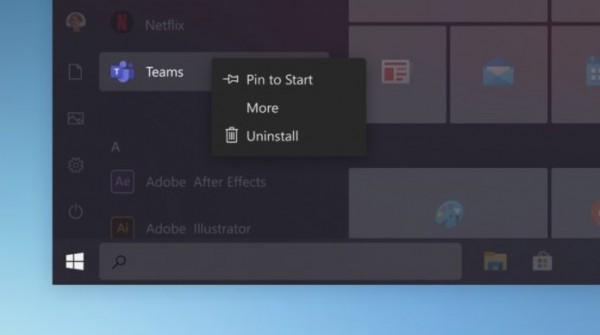 The new change could have the Start menu have a minor update to its interface design as shown by a screenshot that's been circulating on the internet is to be believed.

What's Coming Around the Corner for the Start Menu?

Windows Latest has discovered that there is a possibility of a small change that may be coming for the design of the Start menu. This screenshot is found on a Microsoft tips page and at some point in the page is a mention about the menu being something you can customize.

The theory that many people have is that this screenshot is from an internal testing build of Windows 10, which shows us what's being worked on for the Start menu or at least what Microsoft is thinking of doing in terms of the UI.

The Start Menu Is Becoming Even More Modern?

Like with the majority of other leaks and such, no one knows when this tweak to the design will be made. There isn't even a guarantee that it will be made. But the rounded corners seem to be a smooth and sleek design change that will contribute to the overall modern and contemporary look that Windows 10 has been going for recently.

Of course, preview versions of Windows 10 have had rounded corners show up before, which means that this change will make sense if you think about the previous glimpses we've had of subsequent preview builds of Windows 10.

In the past, Microsoft has implemented rounded corners in its design before, but ever since Windows 8 and its Metro UI, the company has been going for sharp edges and straighter lines so that it could look more unique than other operating systems.

However, as we have seen so far, there are more major changes in store for the Start menu, which includes Live Tiles with backgrounds that match your theme that's used in Windows 10, and the overall look will be cleaner. Some people have theorized that these changes will be included in the Windows 10 H1 2021 update, but it's unclear when the rounded corners will be coming.

What do you think about these changes to the Start menu? Does it look nice or do you think sharp corners look better? Whether or not you like it, there is no guarantee that this change to the design will be happening, so you shouldn't jump to conclusions right away.