SpaceX's Crew Dragon capsule, which was carrying NASA astronauts Bob Behnken and Doug Hurley, safely returned to Earth in the afternoon of August 2, 11:48 a.m. PT. The spacecraft made a "splashdown" in the Gulf of Mexico, off the coast of Pensacola, Florida.

This splashdown concludes the historic two-month mission at the International Space Station (ISS). It also signals the successful completion of the first-ever passenger flight to orbit, says The Verge.

Crew Dragon aced the uncrewed Demo-1 test flight performed in March. Demon-2 or DM-2 aims to prove that SpaceX can transport people to space and safely return to Earth. 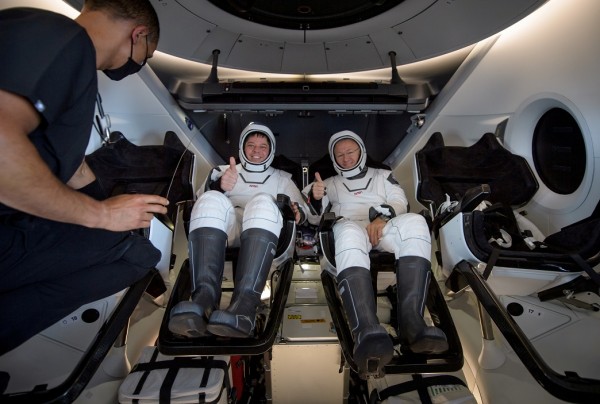 (Photo : THIS IMAGE HAS BEEN SUPPLIED BY A THIRD PARTY. TPX IMAGES OF THE DAY (REUTERS))
NASA astronauts Robert Behnken, left, and Douglas Hurley are seen inside the SpaceX Crew Dragon Endeavour spacecraft onboard the SpaceX GO Navigator recovery ship shortly after having landed in the Gulf of Mexico off the coast of Pensacola, Florida, U.S., August 2, 2020. NASA/Bill Ingalls/Handout via REUTERS

Trip to and from the ISS

Behnken and Hurley reached the ISS late in May. The two astronauts both launched inside the capsule from Cape Canaveral, Florida. They docked the ISS a day later.

There were seven supposed splashdown sites in the Gulf of Mexico and the Atlantic Ocean for Crew Dragon. However, a spot off the coast of Pensacola, Florida, was selected. The weather was favorable enough to give calm waters for the astronauts to land.

Crew Dragon undocked the ISS on Saturday at 4:35 p.m. PT and arrived on the afternoon of August 2.

The GO Navigator, SpaceX recovery ship, was on location ready to retrieve the capsule, crew, and parachutes. Behnken and Hurley announced in a press conference that they have bags prepared if they feel seasick while waiting for the recovery crew. The two astronauts are reportedly doing well after splashdown.

There was a reported tense in the reentry process that placed considerable heat and stress on the spacecraft. There were scorch marks on the capsule, testifying to the rigors of its return journey, according to CNET.

There was also a reported delay in opening the Crew Dragon hatch on board GO Navigator. As shown in a Twitter post, the recovery crew had to purge toxic vapor fumes from around the capsule.

.@SpaceX engineers are doing a purge of vapor fumes around the Dragon Endeavour to ensure the safety of our #LaunchAmerica crew when they open the hatch. pic.twitter.com/MtzBKZj2ci — NASA (@NASA) August 2, 2020

Straight from the splashdown site, Hurley and Behnken were taken to a medical facility on the ship for initial checkups. This checkup is standard return procedures. They are then to take a helicopter ride back to shore.

NASA tweets, "To anybody who has touched Endeavour, you should take a moment to just cherish this day."

"To anybody who has touched Endeavour, you should take a moment to just cherish this day."

Whether NASA and SpaceX will move forward with the first operational Crew Dragon mission depends on assessing the Demo-2 mission assessment.

CNET notes that the safe return of the two astronauts opens a new future for the US spaceflight. It also fulfills the promise of NASA's Commercial Crew Program and its quest to end its dependence on Russian spacecraft to bring astronauts to the ISS.