See How These Ladies Nail Their Uravity Cosplay 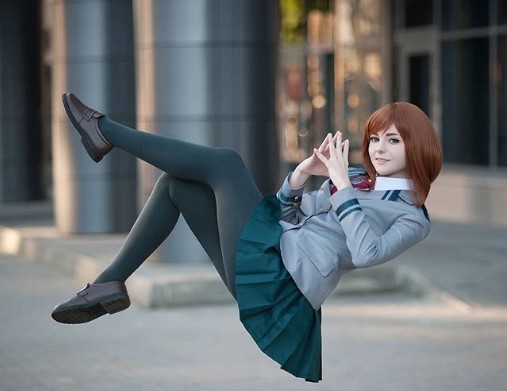 Cosplay is the art of dressing up as a character from an anime, video game, movie, or book. Cosplay has become a worldwide phenomenon and has become a significant part of pop culture in Asia and the Western world - most notably, in Japan.

Among the popular anime characters that cosplayers love to recreate is My Hero Academia's Ochako Uraraka - a U.A. High student whose alter-ego has the power to make things weightless..

Let us look at three of these popular cosplayers who nailed their Ochako Uraraka impression as featured in Dexerto.

Let's start with Mina Starliart. Mina shared on her Instagram post her photo posing as Ochako Uraraka's alter ego, Uravity. The photo captures her perfect Uravity look. She can be seen mimicking the heroine in a black and pink costume complete with floating objects around her.

Mina's bodysuit comes complete wrist guards and a large belt that sits perfectly around her waist. She completed her look with a wig to match the character's hairdo. And of course, a little makeup to imitate those prominent rosy cheeks.

"Hero too, I'm a hero too," she wrote on another post in her Instagram. She also invited fans to check out her new Twitch channel. In her post, she can be seen posing with hands held out and debris floating around her. Her third Instagram post shows her teaming up for a selfie with "motokocosplay," a fellow cosplayer portraying Mina Ashido. In this June 6 post, she expressed how she missed these good times. She also urged people to do their part, so the situation gets better little by little.

View this post on Instagram
It was my wish for a long time, and now I guess it's one of the coolest photos I've ever made ⠀ The people who walked by, had a great view ⠀ @tosuesan Editing by me #cosplay #cospalyer #cosplaying #cosplayers #anime #animecosplay #ochakouraraka #bokunoheroacademia #myheroacademia #cosplayersofinstagram #cosplayphotography #myheroacademiacosplay #bokunoheroacademiacosplay #bnha #mha #ochakourarakacosplay #アニメ #コスプレ #コスプレイヤー #僕のヒーローアカデミア #麗日お茶子 #моягеройскаяакадемия A post shared by   Lissa - cosplay  (@melissa_lissova) on Jan 28, 2020 at 3:40am PST

"It was my wish for a long time, and now I guess it's one of the coolest photos I've ever made," Melissa Lissova wrote in her Instagram post. Her photo shows her defying gravity as she lays on her back, weightless-her U.A. High school-uniform-inspired costume perfectly captured every detail. "The people who walked by had a great view," she quipped.

In another photo, Melissa is shown sporting the heroine's iconic shoulder-length bob haircut. She was also wearing a uniform complete with shoulder pads and tie with a gold button embellishment.

"And I have the same B-day with Bakugo. Do you remember when his Birthday is?" she wrote.

Cosplayer 'honeyrabbiit' looked stunning in her Uravity cosplay. In her Instagram post, she recreated the heroine's look with her black and pink bodysuit. She completed the look with that familiar bob hairstyle and those oversized wrist braces, boots, and a two-piece clickable belt around her waist.

My Hero Academia debuted and featured as a manga series in the Weekly Shonen Jump magazine back in 2014. Two years later, the series found a global following with its highly successful anime adaptation by Studio Bones.

Ochako Uraraka is a student of class 1-A at U.A. High. The school serves as the training ground for the next generation of world superheroes. Ochako's quirk is called "Zero Gravity" which enables her to make things that she touches become weightless.

A recent Reddit post shows an Animal Crossing: New Horizons character cosplaying Spirit Away's No Face! Learn how to do this and even more.

The latest chapter of "My Hero Academia", also known as "Boku no Hero Academia" is out and it reveals a development in the ongoing Internship Arc.

The latest chapter of "My Hero Academia" reveals the real reason why Sir Nighteye gathered various heroes for an urgent meeting and it had something to do with Eri.

‘My Hero Academia’ Season 2 Spoilers: Izuku Becomes The Target Of Every Competitor In Sports Fest Second Round

According to the latest “My Hero Academia” Season 2 spoilers, Izuku will be the target of all the remaining contestants in the sports fest. If this is the case, there is no way for Izuku to win the tournament.

The latest chapter of the "My Hero Academia" manga finally continues Kirishima's fight against a Trigger-induced villain and the heroes are finally making their move on the Eight Precepts of Death.