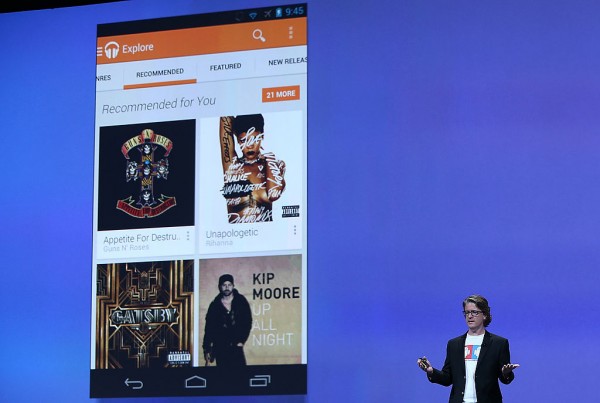 (Photo: Getty Images/File photo)
SAN FRANCISCO, CA - MAY 15: Chris Yerga, Google engineering director for Android, announces the new Google Play Music All Access as he speaks during the opening keynote at the Google I/O developers conference at the Moscone Center on May 15, 2013, in San Francisco, California. Thousands are expected to attend the 2013 Google I/O developers conference that runs through May 17.

Rest in peace, Google Play Music. It's been a slow and painful death.

As Android Police reported, the Android Play Store has stopped selling music since last August. Google has stopped its music service in New Zealand and South Africa last September, and the rest of the world will see its effect today.

"We wanted to make it drop-dead easy and give people time to get to know YouTube Music," says Brandon Bilinski, as reported by USA Today. Blinski is the product manager for both YouTube Music and Google Play Music.

After December, all data, including the web portal and subscription, will be completely inaccessible.

Read: OG Fire Emblem Game Will Be Coming to Nintendo on December 4

What Should I Do to My Google Play Music Account?

Subscribers will now see a notification that encourages them to migrate their music data to YouTube Music or manage them.

To do so, head over to music.youtube.com/transfer and simply click 'Transfer.' You can also click on the 'Settings' menu and click 'Transfer from Google Play Music.' This process may take a few minutes or even a day, depending on how big the content is.

However, some content may not appear on YouTube Music if it's not available. Everything, from purchase, like-and-dislike history, station, and album artworks, will automatically be transferred. Monthly and yearly billing will remain the same.

Although there are no official tools to transfer them to rivals like Spotify, third-party apps like Soundiiz and TuneMyMusic are worth trying.

Or, you can also manage your own subscription. That said, you can download your music library or delete them from the storage for good.

What Did Go Wrong With GPM?

Since its release in November 2011, GPM has let its users from 58 countries with any smartphone device listen to music for free with premium subscription offers.

However, with the fierce rivalry from other superior platforms in the streaming game like Spotify and Apple Music, Google Play Music didn't seem to fit in.

Spotify is currently leading the chart with 113 paid subscribers, with Apple Music and Amazon came with 60 million and 55 million, respectively. Unfortunately, until May this year, GPM and YouTube Music have accumulated only 20 million paying subscribers.

The announcement to shut down the streaming platform came back in 2018, although the official date was not fully confirmed.

In fact, this is not the only platform to wave goodbye this year. Yahoo Group is seeing a full-closing on October 12. Fierce competition from rivals is the sole reason for the plummeting number of users of both platforms.

Goodbye, Google Play Music. It was fun when it lasted.