The world renowned cat and mouse duo, Tom and Jerry — who are most of the time, enemies, but sometimes friends — are back at it again on theaters expectedly in March 2021. This time, though, their friend-enemy relationship for decades will continue in the duo's titular live action and animated combination of a film.

The film's official trailer was released hours ago and garnered attention quickly especially in social media. Thousands shared the video of the trailer in Warner Bros.' official Facebook page, as well as multiple YouTube channels of film websites have re-uploaded the video.

ALSO READ: Tom and Jerry Loses Gene Deitch at 95: Twitter is Remembering How This Illustrator Contributed to Their Childhood

It features the duo parting ways but eventually meeting again in New York City. Jerry stays in his mini home inside a grand hotel, where Kayla (played by Chloe Grace Moretz), a new employee who seizes every opportunity to impress his superior, was tasked to get rid of the mouse inside the hotel. She, then, is helped by Tom who, as we know, for more than 80 years, will do everything to get a fight and scare Jerry. 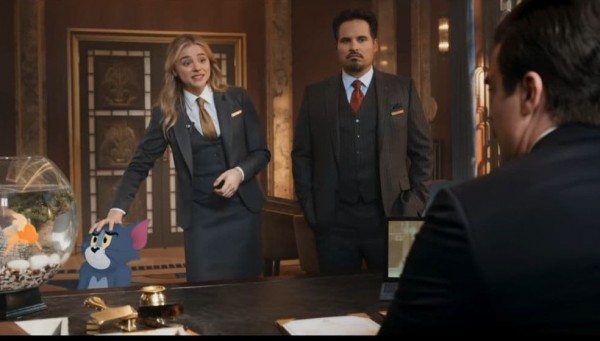 The original plan for the movie was to make it a full live-action movie. Inspired by the tremendous success of the Alvin and the Chipmunks franchise, which featured a CGI adaptation of the chipmunk characters making it a full live-action movie. The film was originally set to a Chicago backdrop. But in 2015, changes have been made and the movie was shifted to a full animated film design.

Yet the final decisions were settled in 2018 when Warner Bros. announced Tim Story will oversee and direct the movie and was then decided to be a live action/animated film.

Live action/animated films found an emergence in the film industry today. Tom and Jerry is just one of those, many yet have already been released. One example is the famous Space Jam, which starred legendary NBA player Michael Jordan, and the iconic character Bugs Bunny. The 1996 film was one of the early hybrid products of live action and animation, where Jordan gets to play with Bugs Bunny and the other characters from Looney Tunes.

The formula used in Space Jam is being translated to the upcoming Tom and Jerry film, with Warner Bros.' success in Space Jam (which now has a sequel, the Space Jam 2 that will star LeBron James and Bugs Bunny) now used once again to represent the cat and mouse duo's return to the big screen.

Now with finer graphics and animations, Tom and Jerry's kept animated forms would definitely blend with the real life settings and actions of the actors in the movie, especially Moretz who will be the third lead and main involved human character on the duo's non-stop quarreling with each other.