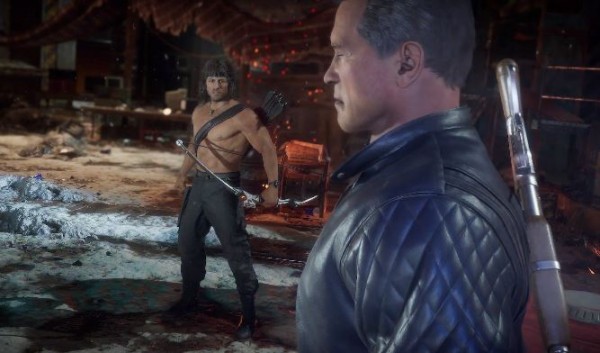 Two legends face each other in a Klassic Konfrontation as the latest Mortal Kombat 11 Ultimate Trailer pits Rambo against the Terminator.

John Rambo, the former Special Forces soldier, goes up against the time-traveling killing machine Terminator T-800. Each new Kombatant is given one round to highlight their arsenals and dispose of their opponent. The first round ends with Rambo drawing first blood while the Terminator makes good on his "I'll be back" catchphrase with a second-round victory.

Of course, the introduction of these two pop culture icons would not be complete without the glaring likenesses of their actors. Rambo (licensed by STUDIOCANAL) features the voice and likeness of Sylvester Stallone himself - drawing from the younger Rambo from "First Blood" (1982) up to "Rambo III" (1988).

On the other hand, T-800 appears to take on the more modern, gray-haired version portrayed by Arnold Schwarzenegger in "Terminator: Dark Fate" (2019). And in true Mortal Kombat fashion, Schwarzenegger even borrows the "Get over here" line, popularized by Scorpion in earlier titles.

As part of the ever-growing Mortal Kombat universe, both Rambo and the Terminator also receive their own "Fatalities," ultra-violent finisher moves that have been a landmark of the franchise since its first installment back in 1992. Rambo features his signature army hunting knife and bandolier, while T-800 has his iconic Harley Davidson Fat Boy and the customized Winchester shotgun.

In his Mortal Kombat 11 biography, John J. Rambo is described as a USSF soldier "deeply haunted by his time in Vietnam." Known for his military and survival skills, "Rambo has reactivated his ruthless fighting skills to infiltrate the MK universe."

Meanwhile, the Terminator T-800 is "a cyborg assassin, sent back in time from a post-apocalyptic future." Noted for his near-indestructibility and superior technology, T-800 is the ultimate killing machine.

Rambo and the Terminator join the famous guest character roster for the Mortal Kombat franchise. Over the years, games bearing the MK title and logo have featured other pop culture icons such as Spawn, Robocop, Alien, the Predator, Jason Vorhees, and even Joker from the DC Universe and Kratos from the "God of War" franchise.