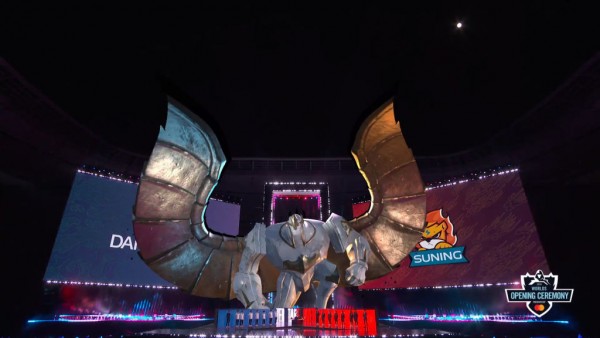 (Photo: Getty Images / File photo)
In this screengrab, players of DAMWON Gaming and Suning line up on stage during the opening ceremony before the start of competition in the League of Legends 2020 Worlds Finals on October 31, 2020, in Shanghai, China.

Stealth tech startup Glytch Inc, previously known only to industry insiders, has broken ground as it announced the first in a series of major esports venues, with each set to be the official home stadium of a major team.

The string of North American gaming arenas kicked off in Los Angeles, set to open in the second quarter of 2022. With this large step, Glytch aims to redefine sports and entertainment through the fusion of its gaming venues, equipped with the latest technology, and the next generation of entertainment and dining experiences.

Each of its venues promises to be large-scale locations - between 50,000 to 70,000 sq. ft. Capable of seating thousands of audiences and with a dynamic staging setup, Glytch is geared to host a wide range of esports and other live events. The event location will be equipped with the latest tech and amenities - virtual reality simulators, escape rooms, drone racing arenas, classic arcade setups - as well as upscale food and beverage selections.

"The current 'state of the art' in food service at esports venues seems to be soft drinks and snacks," explains Glytch founder and CEO Michael Williams.  "Esports should not be defined as sitting in one place for eight hours at a time. Instead, esports should have a high-energy atmosphere with all kinds of dining, attractions, and entertainment options to choose from."

Glytch's venture was chiefly backed by its lead investor Liquid2 Ventures, the San Francisco-based venture capital firm behind the early funding of Cloud9 - one of the most successful professional esports organizations. Liquid2 was founded back in 2015 by NFL quarterback Joe Montana, together with ex-founders and industry veterans.

Together with Liquid2, the Glytch venture is supported by Kevin Lin, TwitchTV co-founder, and Jon Burton, TT Games founder and executive producer for "The Lego Movie."

Teaming Up With A Leading Show Contractor

For this venture, Glytch teams up with Scenario as its design and construction partner. The Cockram and Kajima Corporation division brands itself as a "Show Contractor," specializing in theme park projects such as Disney and Universal Studios parks around the world, as well as the Lionsgate Movie World in Zhuhai, China - dubbed as the world's first "vertical theme park."

Scenario's parent company, Cockram and Kajima Corporation, is a global construction leader first founded in 1840 with annual revenue of more than $17B.