Leaks have revealed a first look image on a possible 2022 Toyota 4Runner TRD Pro Color, which would be available for the top-spec version of the vehicle in its coming release date later this 2021. The Toyota Racing Development (TRD) team has been working on upgrading and modifying existing vehicles in the company's lineup for better overall performance.

The Toyota 4Runner is the next-in-line for a facelift and reconfiguration under the TRD team, as the off-roading and tough 4x4 vehicles of the company are each getting picked off for a massive upgrade on its surface. The upgrade may look like they are all focused on cosmetic upgrades, but TRD components provide more than that for the extra bucks. However, when it comes to the Toyota 4runner's powertrain, it is very likely to stay the same and keep its reliable 4-liter V6 engine that produces 270 HP. For more information and pricing on previous Toyota engines look at Reman-Engine.com.

Following the popularity of the 2022 Toyota Tundra and its massive market recognition from fans, enthusiasts and the public, the Japanese automaker is here again for another round of updates and new offers for its other vehicles. The Tundra may have shocked the world as it bagged one of the high praises for the truck, but it has not yet revealed a TRD version that would soon come.

An Instagram page that mostly posts about the Toyota 4Runner debuted a series of speculated new colors for the flagship version of the performance SUV that would come for its TRD version. The beefed-up variant of the vehicle takes the form of the top-of-the-line version, a.k.a. the "G" variant, with TRD body kits and a special flagship color.

One of the best examples of the TRD variant on Toyota's vehicles is the Toyota 86 TRD, which sports the GT version of the vehicle with track kits, massive rear wing spoiler and special alloy-forged wheels. While not the same or all of the 86 TRD would be available in the 4Runner, a TRD Pro color that would hold the best of Toyota for the SUV would reportedly come.

Now, it is only a matter of waiting and guessing on what the color would be. However, the Instagram leaker called @4Runnersnacks shared various fresh colors that would reportedly come with its TRD version that is soon releasing this year. Among the eye-catching ones are the Citrus Green, Army Green and a Brownish one, which all highlight the 4x4 strength of the vehicle. 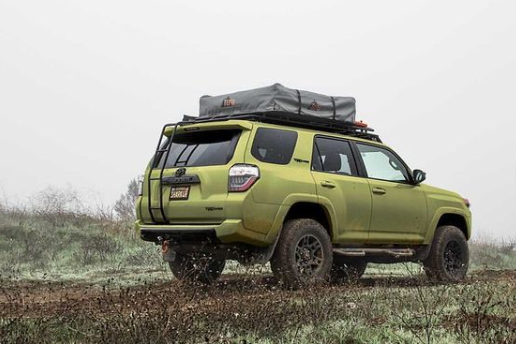 On the other hand, according to Torque News' report, there are speculations that the TRD Pro Color of the 2022 Toyota 4Runner would be shared for the TRD variant releases of the 2022 Toyota Tundra. The report also suggested that other SUVs, Pickups and 4x4-spec vehicles would also receive this including the Toyota Tacoma and the Toyota Sequoia.

Instagram user TRD Jon (@trd.jon) said that several speculations on the Toyota TRD Pro Color of the year would be using the color of 2017's Corolla IM, which is the Citrus Metallic Green finish. These massive vehicles will reportedly soon break tradition by the TRD's Citrus color, but fans are already excited about this leak as it fits preferences.