Tesla announced last 2018 that it is planning to debut a drive-in restaurant at a massive location in Santa Monica, California where servers would roller skate around the place and a retro theme would be observed. However, fast forward to three years later, there are still no signs that it would be continued until permits reveal a new Supercharger V3 station instead. 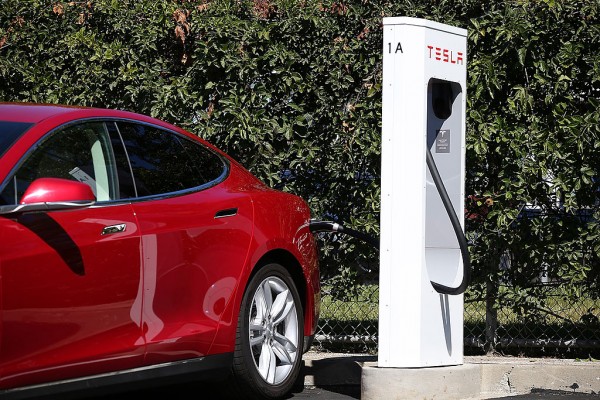 Photo: Justin Sullivan/Getty Images
FREMONT, CA - AUGUST 16: A Tesla Model S sedan is seen plugged into a new Tesla Supercharger outside of the Tesla Factory on August 16, 2013 in Fremont, California. Tesla Motors opened a new Supercharger station with four stalls for public use at their factory in Fremont, California. The Superchargers allow owners of the Tesla Model S to charge their vehicles in 20 to 30 minutes for free. There are now 18 charging stations in the U.S. with plans to open more in the near future.

It seems that Elon Musk's plans of relieving the good ol' 1950s where servers roller skate to a parked vehicle waiting for orders cannot come through for the modern times, but instead, a new massive station debuts. Electric vehicle charging stations already have several locations in California and the country now, but Tesla Superchargers are a rarity in public.

The Tesla Supercharger V3 is one of the best fast-charging stations for electric vehicles, as it can fully charge the vehicle in under an hour or less, along with a 15 minute-charge of almost 100 miles of range for a Model 3. The station can also accommodate other electric vehicles to charge, and would also pair with its fast charging capabilities of almost 1,000 miles per hour. 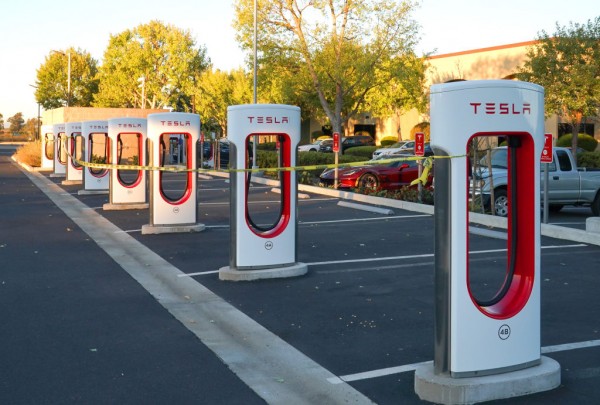 (Photo : (Photo by Thearon W. Henderson/Getty Images))
NAPA, CALIFORNIA - OCTOBER 10: Tesla charging stations are tied off with caution tape to prevent cars from charging on October 10, 2019 in Napa, California. PG&E has continued plans to cut power to hundreds of thousands of customers across central and northern California as a precaution against starting wildfires as low humidity and high winds increase the threat in the area.

According to Electrek, a massive location in Santa Monica is changing plans, particularly with Elon Musk's initial statement and claims that it would focus on a drive-in restaurant. Supposedly, it would debut roller skates, rock and roll music, and fast food where electric cars could also fill up its batteries with the available stations.

Gonna put an old school drive-in, roller skates & rock restaurant at one of the new Tesla Supercharger locations in LA

However, there were no reasons specified as to why Tesla has changed its mind, discontinuing the project despite the massive reactions it initially received when Musk first tweeted about the venture in 2018. Moreover, the station will be located in Los Angeles, which is one of the major cities and hubs of the state where EVs are popular and used.

It seems that the world would not be able to experience and see that anymore, at least for the time being, as Tesla's Santa Monica location now has permits to build a Supercharger V3 station instead. The initial plans were a combination of a drive-in restaurant and a Supercharger station which would complement each other as customers would not have to wait without purpose.

Apart from being near Los Angeles, the Santa Monica station is strategically located along Route 10 and the highway that leads to LA, meaning that it could be a good spot for people to either rest, charge or eat. The duality of the supposed drive-in restaurant could have also been a potential hit of this pandemic as people get to stay in cars and wait for orders.