The second expansion for "Doom Eternal" makes its way in the market on March 18. Bethesda Software and id Software released the final trailer for "The Ancient Gods - Part II," which will also marks the end of the famous Doom Slayer saga.

Doom Slayer is a playable character and the protagonist on "Doom Eternal." His saga was a hit in the old games of "Doom (2016), "Doom 64," "Doom II: Hell on Earth," "Final Doom" and the more recent "The Ancient Gods - Part One." Doom Slayer's story leads players to fight against Hell's Boss, the Dark Lord. As they progress, players encounter the ancient Sentinel settlements, the celestial realm of the World Spear, and Earth's great Immora. 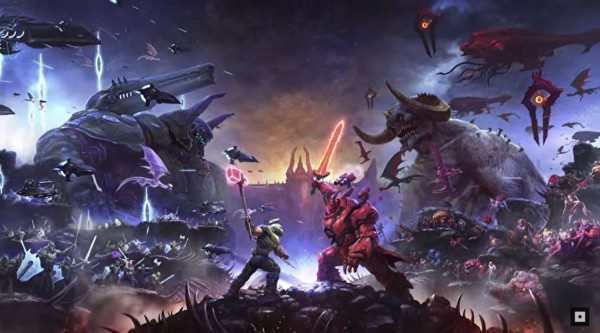 The war in hell will be ridiculously challenging. As seen in the trailer, the all-out war will involve hundreds of demons, overpowered enemy commanders, and even dragons. Here is a sneak peek at what you can expect in "The Ancient Gods - Part Two."

PCgamer talked about some of the new enemy variants found in the game arena. The Armored Baron has upgraded its armor and attacks with charged fist offense. The Stone Imp has a thicker defense skin compared to the previous series and can roll around while being charged with fire. The Cursed Prowler could cloud players' visibility and disable  dash ability until they  manage to land a Blood Punch on it.

Players also need to be careful of killing the Screethers, as they can empower nearby enemies when they die.

Brand new weapons would also be released in this second saga. The hammer featured in the trailer called Sentinel hammer kills all fodder enemies and stuns major enemies with its wide AOE shockwave attack. This makes it easy for players to pick and prioritize certain demon enemies. Dazed enemies have a chance to drop ammo, which can help resource allocation loop.

The game director Hugo Martin hinted in that the Sentinel hammer can make major plays against the Marauder. "If you hit him on the green flash, slam him with the hammer, you could combo him, and you know, he falters long enough that you could kill him in one shot."

What Happens to The Future of Doom?

Polygon opened an interview with Martin about the future of this popular game. Hugo said that the Doom Slayer is a somewhat timeless character, and there are many possibilities of what the hero could do going forward.

"The Ancient Gods - Part II" marks the end of the story that began in 2016 "Doom." However, the universe it leaves behind still has a lot of potentials to offer. Developers and designers said that as long as people still have reasons to play "Doom" games--the over-the-top gore and violence, the self-seriousness mixed with a little camp comedy, and the complete faith that good offense is always the answer for best defense--then the future of the game still looks promising.