The Hyundai Santa Cruz pickup truck, which has bee a long-awaited unit since 2015, was spied in a parking lot earlier in the week and revealed some key features.

Here's a clear look at the upcoming vehicle from Hyundai: 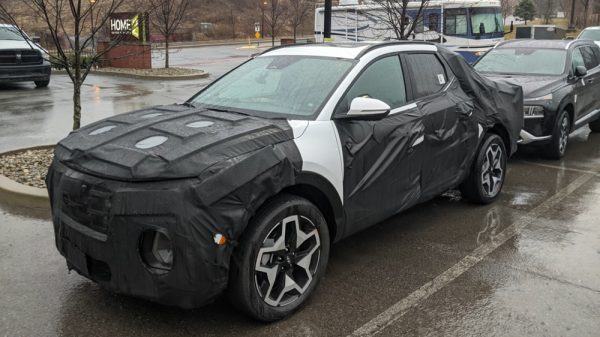 YouTuber 80% Garage shared how he actually spotted the "little truck" by Hyundai.

"I was actually on my way home from dropping my kids off at school, and out of the corner of my eye, I spotted this little truck. About three or four months ago in this very same parking lot I'd actually seen three test mules for the Genesis GV70," the YouTuber said.

The leaker was certain that despite the camouflage cover, this is the 2022 Hyundai Santa Cruz model.

The Hyundai Santa Cruz pickup truck is a long-awaited vehicle ever since it was teased back in 2015 during the North American International Auto Show. It combines the idea of a hybrid truck that works like an SUV but with a pickup truck's utility functions. Hyundai said in that NAIAS event that Santa Cruz has a two-liter turbo diesel that will generate up to 300 pounds of torque.

In the following years, Hyundai revealed it has continued its research and upgrades for the crossover truck concept. While buyers wait, Hyundai Santa Cruz's naked body leaks were shown on the internet, along with some images taken as the car was spotted testing in Finland. This year, fans get even more leaks for the 2022 Hyundai Santa Cruz.

Autoevolution noted that the 2022 Hyundai Santa Cruz takes influence and inspiration from the newly released Tucson. The hood with the front fender, designs of the side mirrors, and the A-pillar's triangular trim bare similarities on the Tucson's designs. However, the taillights, rear quarters, and front grille are unique to Santa Cruz.

The 2022 Hyundai Santa Cruz has been spied with Tucson-inspired styling. Additionally, the pickup truck will ride on top of the company’s N3 architecture and it will be offered with at least two powertrains to choose from, including a 2.5L turbocharged four-cylinder engine. pic.twitter.com/BvM5kbA7p2

The Santa Cruz is expected to enter production at Hyundai Motor Manufacturing Alabama (HMMA) in Montgomery in the second half of 2021 and be completed as a 2022 model. Santa Cruz will join the U.S-spec manufacturing of Santa Fe, Tucson, Elantra, and Sonata. The HMMA factory is noted for being responsible for creating cars with no fewer than four engines. These machines include 1.6 T-GDI, 2.5 T-GDI, and an Atkinson-cycle 2.0-liter four-pot motor, the 2.5 GDI.

Based on these facts, it is possible customers would be offered a standard unit with front-wheel drive and a four-cylinder engine. It is also expected that 2020 Hyundai Santa Cruz will have an eight-speed automatic standard and HTRAC AWD option. The Santa Cruz unit price is expected to start at $25,000.

Santa Cruz only has four feet bed length, which is approximately 1.2 meters. This makes it a very short bed compared to mid-sized pickup trucks such as Tacoma, Colorado, or Ranger. While it remains different from most pickup trucks, the Hyundai Santa Cruz Crossover Truck is one of the most-anticipated units to be released in the near-future.