Strech is a robot arm that could effectively carry boxes around. It can shift up to 800 boxes an hour and run at eight hours operating time on battery. The machine has not yet been released in the market, but Boston Dynamics is confident of this technological success. 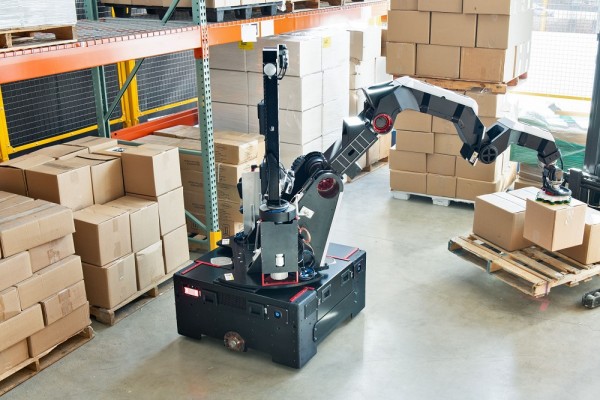 (Photo : Boston Dynamics/Website via Screenshot)
Boston Dynamics is unveiling a new machine built to overcome warehouse operations. Strech is a robot arm that could effectively shift up to 800 boxes an hour.

Boston Dynamics is an American robotics design company famously known for their robot dog Spot. Spot was made commercially available in 2019 and brought massive success to the technological advancement of remote operations. Since then, Boston Dynamics continued developing dynamic technologies such as Atlas, Handle, and the most recent Stretch.

As seen in the video, Stretch is a straightforward machine with high utility functions. Not only does it efficiently pick up packages of different shapes and sizes, but it also has a built-in stabilizer to handle them with care. It could also be operated to enter tight or closed spaces and function effectively, especially for loading or unloading boxes. The machine also performs its task with exceptionally smooth, precise movements.

The Verge reported Stretch is a machine with a square mobile base mounted on a set of wheels. It also has what  the company calls a "perception mast" equipped with cameras and sensors that make it intuitive, easily detectinng its parcel or possible obstacles in its way. Its most significant feature is the huge robotic arm with its seven degrees of freedom and a suction pad array that can grab or move boxes.

Stretch could grab boxes up to 23 kilograms and move freely in most directions, thanks to the counterweights built inside its base. Boston Dynamics Vice President of business development Michael Perry explained that this machine's design is similar to their Atlas robot.

"Atlas picking up a box isn't just about extending the arms and moving them; it's about coordinating the hips, legs, and torso," Perry said, per The Verge.

Unlike the traditional automation equipment mounted and installed in the warehouse, Boston Dynamics and Stretch pride themselves to be incredibly mobile. Stretch is designed to work in environments that do not have automation infrastructure and could operate perfectly at the back of a truck, between conveyors or through the aisles.

Stretch breaks the concept that robots can't work in warehouses because of the complicated and erratic workspaces. Instead, it creates a machine that values flexibility and easily handles this kind of challenge. Boston Dynamics believe that Stretch could bridge the gap between automated machinery functions and adaptability to its environment.

Stretch is also a robot that could easily be operated by anyone with a few hours of training. Boston Dynamics is also known for keeping its products customer-friendly and fit for commercial use. Unfortunately, Boston Dynamics have not yet released the market price for Stretch. Stretch is currently undergoing its pilot test and is estimated to be ready for commercial deployment sometime in 2022.