A new portable PC is entering the market and will likely give Nintendo Switch a run for its money. Here's what you need to know about the new portable PC by Valve--currently called SteamPal--that might be launching by year's end.

The game studio Valve has been secretly building a "Switch-like portable PC design," Ars Technica reported. It is unsure what the final name of the product will be, but for now, it is going by the codename "SteamPal."

"SteamPal" is a new device spotted by Pavel Djundiuk, the operator of Steam DB. He first noticed the change in the Steam client's code, Polygon stated, and discovered that it was tied to a prototype controller named "Neptune." It came with a "Neptune Optimized Games" string that first started appearing last September 2020.

I have a feeling all these strings related to "Neptune": https://t.co/Ih0K2y4E5A

As mentioned, "SteamPal" is not yet the final name of the device. The company has a history of secrecy and has not gotten back with comments for Polygon or Ars Technica who reached out to the company spokesman Doug Lombardi.

Although the name isn't confirmed, the launch of the device is very likely. Earlier this month, Gabe Newell, the co-founder of Valve, hinted the concept in a high school panel conversation in New Zealand, Ars Technica added.

When asked about Valve's vision for the future of console video games, he offered a vague and indirect answer: "You will get a better idea of that by the end of this year... and it won't be the answer you expect. You'll say, 'Ah-ha! Now I get what he was talking about.'"

"SteamPal" will run a multitude of games on the Steam PC platform, including an AMP or Intel-system-on-a-chip and will most likely be coming with Linux, Engadget shared. This is likely part of Valve's push to bring more games to Linux. It is also possible that the handheld gaming console can be compatible with Windows 10.

It is unclear whether or not Valve will offer customers a choice over specs like power level and batter life by releasing multiple SKUs.

One prototype of the handheld device is said to be wider than the Nintendo Switch. The extra width can accommodate an array of control options like an assortment of gamepad buttons and triggers, a pair of joysticks, and at least one thumb-sized touchpad.

The SteamPal should be housing a touch-sensitive screen as well. But Ars Technica stated it is unlikely that Valve will be including a full keyboard on its console.

The world is still facing a shortage of semiconductors, so tech companies and car makers are trying to make it work. If all goes well with the supply of microchips, fans should be seeing the SteamPal hitting shelves by the end of this year.

Continuing with the SteamPal vs. Nintendo Switch comparison, like the Nintendo Switch, SteamPal will be hosting a USB Type-C port. It will have the option to "dock" larger monitors although it is unclear how connection will work or if Valve has plans on releasing a dedicated SteamPal dock. A "SteamPad" perhaps? 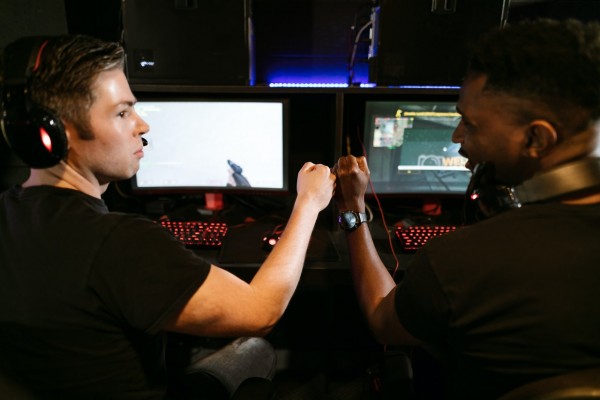 (Photo : RODNAE Productions/Pexels)
Valve is coming out with its own Switch-like handheld console. The ever-so-secretive Valve isn't giving much away but here's what we know.

Valve Goes Up and Down

Valve's history with hardware launches has been an unsteady one. In 2015, Valve introduced Steam Machines, a line of console-like gaming PCs that they quietly de-listed in 2018. The Steam Link, which allowed users to stream games to the gamers' TVs from their PC, was also phased out in 2018.

The Valve Index, on the other hand, is one of the most sophisticated VR headsets on the market. At $999, the virtual reality headset launched in the summer of 2019 for their game "Half-Life: Alyx" that was scheduled to release in March 2020. Both the device and the game received positive critical reception.

The Launch of the Nintendo Switch allowed the Japanese gaming company to have an increased and significant hold of the console market. They saw a rise in sales, especially during the global pandemic. Other companies took notice and are now trying their hand at launching their own.