A new "Guardians of the Galaxy" skin has been teased. Gamora is joining "Fortnite", with a new cup also announced for interested players who want to get her skin early and for free!

Gamora's arrival also means that the entire "Guardians of the Galaxy" is close to completion, with only Drax missing out on the fun.

Any Marvel fan would be familiar with the green-skinned alien dubbed as "the fiercest woman in the galaxy," "daughter of Thanos," and "the most dangerous woman in the universe." However, Gamora is best known as a warrior from the "Guardians of the Galaxy," together with Star-Lord (Peter Quill), Rocket Racoon, Groot and Drax the Destroyer.

The incoming Gamora skin, previewed in the Epic Games website, is seen wearing a white suit outfit taken from the Marvel comics. Her bundle includes her Cloak Back Bling, Godslayer Pickaxe and the Godslayer Glideboard.

No official information was released for Gamora's V-bucks price. However, a prediction from PCgamer estimates the skin to cost between 1,200 to 2,000 V-bucks. Gamora's complete bundle is estimated to be priced at 2,000 to 2,500 V-Bucks.

Also, it is important to note that Gamora is paired up with Star-Lord in the Item Shop. Although it is not certain, YouTuber Tabor Hill suspects that the old Star-Lord skin would be coming back, instead of a brand-new iteration. The Star-Lord bundle could possibly include: Star-Lord Pack Back Bling, Guardian Axe and The Milano glider.

How to Get 'Fortnite' Gamora Skin Early

Gamora will officially arrive at the Fortnite Item shop on August 14 at 8 PM ET.

Prior to her release, a Gamora Cup tournament will happen on August 11. To highlight, this tournament is a Duos Cup. A player and a friend have to earn as many points as they could in three hours and 10 matches. Each player who joins the event and scores at least eight points will earn the "Daughter of Thanos" spray.

Scoring System for the "Fortnite" tournament will follow the same pattern found in the Official Rules.

Only top-performing teams can unlock the "Gamora" In-Game Cosmetic Outfit and Back Bling in the tournament.

Gamora is not the only superhero alien coming to "Fortnite". Gamespot noted that the "Man of Steel" will be making his debut on August 12. This new skin would come with Superman quests, which would be completed through the island games. More events might also come out later this month as "Fortnite" comes close to its season end, approximately a month away in September. 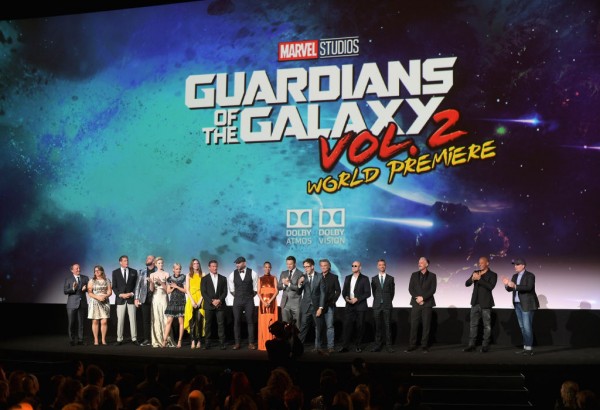 (Photo : Charley Gallay/Getty Images for Disney)
A new "Guardians of the Galaxy" skin has been teased. Gamora is joining "Fortnite", with a new cup also announced for interested players who want to get her skin early and for free!