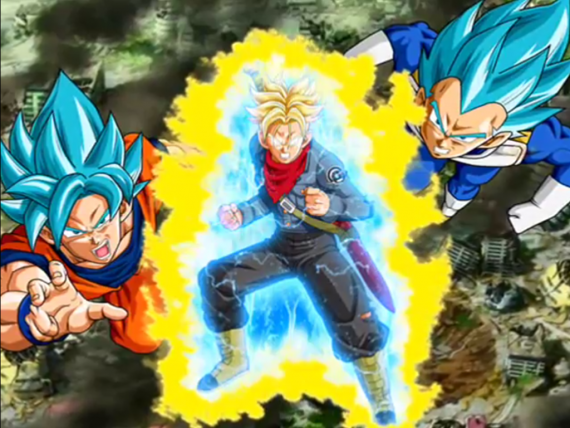 Which "Dragon Ball Super" fusion and transformation do you think can finally defeat Zamasu and Black? (Photo : Chica Z/YouTube)

The phenomenal anime series "Dragon Ball Super" has proven time and again that the franchise is timeless. It successfully drew its fans on the edge of their seats every single episode, just like the other versions of the hit anime.

Recently, fans of the series have been anticipating the fate of our heroes, Goku, Vegeta, Trunks and the rest of the gang as they face the evil tandem of Zamasu and Black. Ever since the action-packed series revealed the truth behind the vicious villains, fans have been theorizing non-stop as to how will they be defeated.

Theories vary from new transformations, never-heard-before fusions to Super Saiyans of different colors - you name it, fans' creative minds have it. Here are some of the interesting theories that avid fans came up with.

Super Saiyan transformations have become one of the most hypothesized ways to defeat Zamasu and Black. After Black transformed into Super Saiyan Rose, fans came up with the idea that Goku might transform to the same form as well to become stronger enough to defeat him.

Super Saiyan Rose features a reddish-purple aura, light pink hair with pure-white highlights and light gray eyes. The clothing also changed to a purple hue. According to reports, Super Saiyan Rose matches that of Super Saiyan Blue when it comes to strength.

However, up until the latest episode, Goku hasn't transformed to Super Saiyan Rose yet and looks like he won't be transforming to one anytime soon.

Aside from Goku, Vegeta is also one of the key characters in "Dragon Ball Super." However, his massive energy seems to be not enough to take down Zamasu and Black. Fans speculated that Vegeta might transform to Super Saiyan White in order to put up a good fight.

In Super Saiyan Green form, Goku will sport a green hair and black pupils. Although the transformation makes him more powerful, his behavior is not as aggressive. So far, the said Super Saiyan Green has not made an appearance in "Dragon Ball Super" to date. It's safe to assume that it might not be happening anytime soon too.

If the different colors of Super Saiyans mentioned above are not enough, here's another intriguing fan theory. Apparently, fans believe that Goku and Vegeta will fuse to Super Saiyan Blue Vegito. The said form is believed to be the most powerful character in the "Dragon Ball" franchise.

According to reports, it is a result of Goku and Vegeta fusion with the use of Potara Earrings. Super Saiyan Blue Vegito boasts a combination of Goku and Vegeta's characteristics, making it the most powerful one out there. He has the same height as Goku and hair that resembles Vegeta's. The overall look is more inclined to Goku though. However, there has been no confirmation if the said fusion will indeed take place.

Triple Fusion Between Goku, Vegeta, And Trunks To Vegiku

Recently, another intriguing rumor surfaced claiming that the ultimate triple fusion between Goku, Vegeta, and Trunks is the key to finally defeat the evil duo Zamasu and Black. A leaked image allegedly revealed the said fusion to be Vegiku, derived from Vegeta, with Trunks' "k" and Goku's "u." The character features Vegeta's clothing, Trunk's hair and Goku's volume.

However, it was also noted that Vegiku is exclusively for the "Dragon Ball Heroes" game so his appearance in the "Dragon Ball Super" might be a bit farfetched for now. But who knows, maybe Vegiku could really be the answer to Zamasu and Black's evil doings.

So many theories yet so little time. "Dragon Ball Super" will soon conclude its run and fans will be able to get the answer as to who will really defeat the despicable duo. Catch more of Goku, Vegeta and Trunks as they continue to fight their way against Zamasu and Black.

Will Goku and Vegeta be able to defeat Zamasu and Black now that they finished training in the future?

New official updates for "Dragon Ball Super" reveals that things are going to get more interesting in the ongoing Universe Survival Saga.