A New Rival, Tesla Is Up For Another Challenge With Jaguars New EV 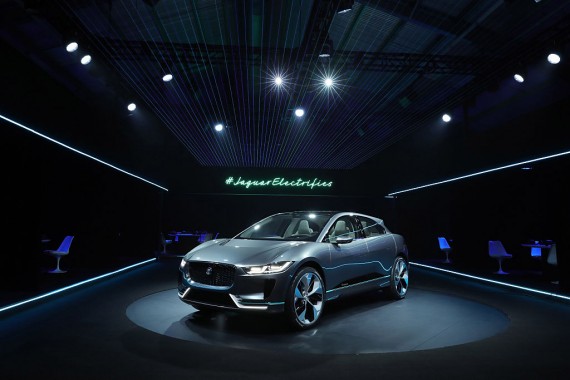 Having a sustainable and reusable energy source has been a challenge with electric vehicle manufacturing. Jaguar gives it a shot with its newest concept crossover vehicle, the I-Pace Crossover SUV. (Photo : Photo by Handout/Jaguar Land Rover via Getty Images)

Different advancements in technology have happened throughout the history of autonomous and electric cars. Each of this advancement has been towards sustainable performance, from hybrid engines to fully electric plug-ins. Sustainable energy has become better and better with every new electric car that is being introduced to consumers.

Tesla, the world leader in autonomous car making, undoubtedly paved the way to renewable and sustainable performance in electric cars. The company also announced solar paneled roofs for cars to run as a defroster and to generate energy. Tesla stated that the solar roof will come as glass tiles that conceals the solar cells, and that it can still look nice with a variety of style and colors.

Ever since Tesla manufactures their first electric car and shared it with the public, car manufacturers have also started moving into the electric car business. Almost each new electric car had been using Tesla cars as their basis of comparison and some companies have even unofficially announced rivalry. One new rival to Tesla is British luxury carmaker, the Jaguar.

Jaguar Rivals The Model X With The I-Pace

Jaguar or Jaguar Land Rover is a British car manufacturer that is owned by Indian company Tata Motors. The company has been known to produce luxury sedans and high-end sports cars. They have recently announced their first-ever electric car, the Jaguar I-Pace Concept Crossover. The concept car is still only available for viewing but promises to be out to hit the roads in 2018.

Although the I-Pace is Jaguars first electric vehicle, the company has known to be making vehicles as early as 1922. The company's long years of experience are an advantage that they hold against Tesla. That experience could also be the reason that they are now ready to go toe to toe with Tesla motors. Jaguar announced that their I-Pace concept would beat Tesla's car in different fields such as space, reliability, battery and overall performance. The

I-Pace Has A Longer Running Motor Than Tesla

The Model X, Tesla's crossover SUV, is the vehicle closest to the specs of the I-Pace. Both have the forms of an SUV but the I-pace goes further with a range of 310 miles, while the model X can only go up to 289-mile range. In terms of electric motor performance, the I-Pace still leads with a 400-horse power to Tesla's 259horse power. Jaguar also teases that there "engineering and design teams have torn up the rule book to create a bespoke electrical architecture that results in a no-compromise, smart, five-seat sport car and sports utility vehicle in once with a dramatic design".

The Jaguar I-pace will also feature two electric motors that equal to the torque rating of their F-Type SVR that gives the car the ability to reach zero to 60 miles per hour in less than four seconds. Jaguar also boasts that they will have a different approach in the area of sustainable planning as they utilize their ClimateCare, a carbon financing initiative the company established in 2007. Jaguar might really be onto something with their first crossover electric vehicle, something that might leave Tesla behind if they are not cautious enough.

The Tesla Model X P100 D is still as dreamy as it was when it first came out a couple of years ago.

A Tesla Model X protected its driver from a violent crash allowing him to get hitched a day later.

A class-action suit was fled against Tesla for its "dangerously defective" Autopilot technology.

Tesla Model X: Everything You Need To Know

As one of Tesla's highly anticipated vehicle models, what are the things that one should know about the Tesla Model X? Is it the new all-electric powered SUV? What makes it the 'car of the future' as what people would call it? Here are the details

Tesla is a growing a market in the auto industry, which offers a range of electric vehicles that have grown in popularity in the United States. But the company has not put a foot inside the UAE.