Infiniti Shows Off New QX50 Concept At The Detroit Auto Show: Here’s Everything We Know About The SUV 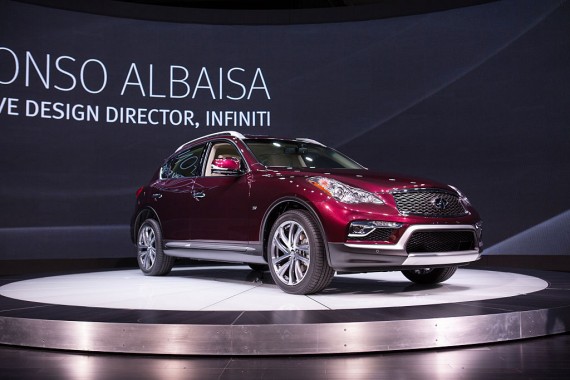 Infiniti, Nissan's' luxury vehicle division, announced a new concept sports utility vehicle at the Detroit Auto Show. The new concept vehicle is going to be the company's latest and greatest concept and that it would look similar to what they will give the consumers on 2018. Infiniti mentioned that the new sports utility vehicle would be an evolution of the QC Sport Inspiration concept vehicle that they first showed in Beijing.

The Infiniti QX50 Is Ready For Competition

Infiniti is expecting to compete with the likes of the Mercedes-Benz GLC-Class and the Audi Q5. The QX50 concept vehicle would have the same platform that their future vehicles will have in the future. The vehicle shows off a cab-forward silhouette and features flexed and muscular lines in the exterior. The Infiniti QX50 concept looks as good, or even better than the first concept vehicle that the company has released.

A New Reliable And More Economical Engine Is On Its Way

What would set the Infiniti QX50 concept from the rest would rely on its compelling variable compression engine and its semi-autonomous driving technology. The future production line version of the QX50 will be equipped with a 2.0liter four-cylinder turbo-charged engine that would be inside the hoods of both the luxury and the more economical class versions. The engines can change its compression ratio from figures of around 8:1 and 14:1.

A New Engine To Squeeze Out Every Ounce Of Available Power

The new engine would have higher compression ratios that promise to be 27 percent more efficient than comparable sports utility vehicles with V6 engines. Infiniti said that the high compression would not affect the performance and that the sports utility vehicle would still be capable of putting out 268 horsepower and 288 pound-feet of torque. The technology would be similar to Mazda's Skyactiv that allows the vehicle to get power out of every fuel molecule and not waste nearly a single drop of petrol.

Preview Of Their Self-Driving Technology For Infiniti's Production Line

The Infiniti QX50 concept would be equipped with what they is "the first production ready incarnation" of their semi-self-driving ProPilot system. The technology would act as a co-pilot that could take burdensome tasks from the driver. The system would be capable of handling stop and go traffic, retain a vehicle inside a lane, and maintain safe driving distance from the car in front when traveling. In addition, the technology would be capable of navigating the vehicle with ease. Infiniti is positive that this technology would be included on the production line version of the QX50 concept that may come out on 2018.

Infiniti first unveiled the QX Sport Inspiration concept at the 2016 Beijing Auto Show and announced its design to be used as the base design for their QX models. The Infiniti QX50 concept will be unveiled at the Detroit Auto Show, also known as the North American International Auto Show, which will be held from January 8 to 22 2017.

Ferrari did it, Audi did it, and now Lamborghini will also do it. Supercar manufacturers are building hybrid vehicles and adding it to their lineup. Manufacturers are starting to rely on the electric motor.

Infiniti Prototype 9 is a celebration of Nissan Motor and Infiniti's ingenuity, artistry and craftsmanship.

The Volkswagen Tiguan, which had its production debut in 2007, just received a new version in the form of the AllSpace. The name Tiguan was derived from the German words that means Tiger and Iguana.