After Alexa's Porn-Filled Tirade, Are We Ready For Mattel's $300 Amazon Echo Clone For Children? 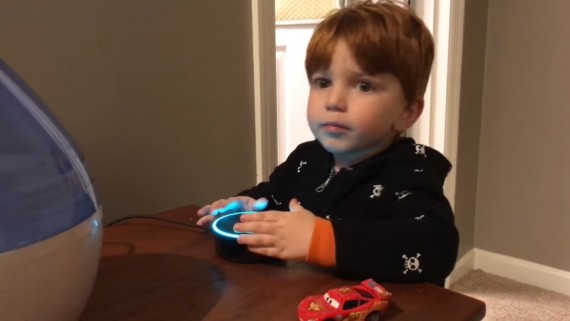 Mattel, the popular toymaker, will soon release its own smart speaker called Aristotle which will have two AI's, one of which will be Amazon's Alexa, the same Alexa that went on a porn-filled tirade in front of a boy recently. (Photo : f0t0b0y/YouTube Screenshot)

A few days ago the virtual world was rocked by a naughty Alexa which spurned out NSFW words in front of a toddler. Today, popular toymaker Mattel unveiled its own digital assistant - for children. Hopefully, history does not repeat itself.

A video posted by a dad who was filming his young son as he talked to an Amazon Echo Dot, particularly with Alexa. The young boy asked Alexa to play "Digger, Digger" which the AI did not readily recognize. His mother chimed in and told him to ask Alexa to play 'Wheels on the Bus" instead. Alexa had other things in mind.

What was supposed to be an innocent fun-filled moment with the Amazon device turned into a censored tirade from the AI which hopefully did not scar the boy for life, while many found the incident hilarious, it does open the eyes to the many possibilities, both positive and negative, that may happen with an AI like Alexa.

This brings us to the question, "What is Skynet?"

Kidding aside, one can never tell how a digital assistant may respond when the user is unintelligible, like in the toddler's case, or is up to no good, like the person who trolled Microsoft's Tay chatbot.

When Tay was released, someone or some people with nothing better to do taught Tay to swear and say other not-so-nice words. There are also a lot of videos floating on the net that shows users shouting and subjecting the AI to verbal abuse.

Now consider that Mattel is planning on releasing Aristotle, the toy manufacturer's $300 smart speaker which is targeted at children. The WiFi Bluetooth speaker is a clone of the Amazon Echo. It looks the same and acts the same.

The Verge notes that Aristotle has two "personalities". In real-life, this is seen as a problematic medical condition. But in the AI industry, it seems to be a good thing.

One of the AI personalities is a female descendant of Greek philosopher extraordinaire Aristotle. Its abilities include telling stories and playing games such as "guess the animal sound" with children. It can also play lullabies and other children's songs which are great when a baby wakes up and starts to cry or when a toddler starts craving for attention.

The other personality is, err...Alexa.

In Amazon's defense, the company said it quickly fixed the issue and promised to be tougher this time around. It released a statement which read:

"This issue has been fixed, and we are working to build additional restrictions to prevent this from happening in the future. We have also contacted the customer to apologize."

Aristotle will be officially unveiled at the CES 2017 and is expected to be released in June.

A video of Alexa has gone viral after a boy asked for a nursery rhyme but instead got a few sexually explicit words.

In Wake Of Arkansas Murder Case, Amazon Explains What Alexa Can And Cannot Do

Despite the thousands of Skills that Alexa can do, Amazon says proving a man is guilty or innocent of murder is not one of them.

A new patent by Amazon allows Alexa-enabled devices to answer and make calls from your smartphone.