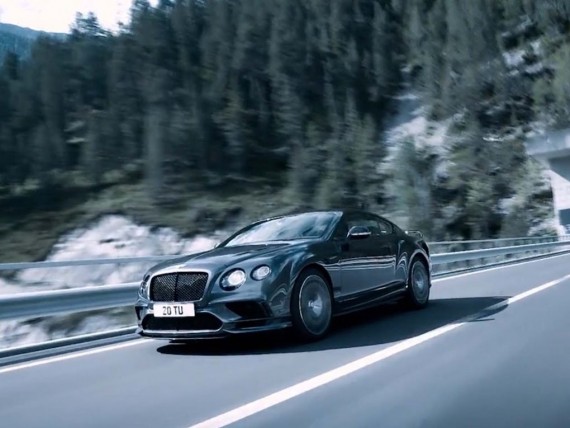 Bentley has just created a monster machine with the new 2017 Continental Supersports. They have revived the legendary car of the 1920's and made it the fastest four-seat production car in the world. (Photo : sportauto/ Youtube)

British luxury car manufacturer, Bentley, has just created a new breed of sports car as they revealed the new 2017 Bentley Continental Supersports. The new Supersports supersede the capabilities of the current Continental GT by a huge gap. This new car can beat and leave even the toughest of supercars in the dust.

The Fastest Production Car In The World

The 2017 Bentley Continental Supersports has just been officially named the fastest production car with four seats. This luxurious monster is powered by a freshly engineered six-liter W12 engine that produces 700 horsepower and 750 pound-feet of torque. The 2017 Supersports can make a quick run from zero to 60 miles in just 3.4 seconds and has a top speed of 209 miles per hour. A record that will put it closely behind a Lamborghini Huracan and makes a Porsche Carrera 4S trailing behind by a full second.

The Fastest Bentley Ever Produced

Being Lightweight Is The Key To The Supersports' Speed

The 2017 Bentley Continental Supersports' weight also helps in producing such speeds. Carbon fiber fittings are used in the exterior panels, large carbon ceramic brakes, lightweight forged alloy wheels and the titanium exhaust system makes the car power to weight ratio ideal. New air-cooling, conrads, bearings and better turbochargers add to the re-engineered W12 engine to make the Supersports the fastest of them all. The cars huge carbon ceramic brakes is an essential element in the cars overall system, ensuring maximum stopping power while ensuring that the rotors does not overheat.

Bentley still preserves its luxurious styling on the interior with its unique tri-color Alcantara leather. Buyers would also have the option to get a checkered carbon fiber fascia instead of the traditional wooden veneer. The one-of-a-kind steering wheel and gear shift lever is also trimmed in Alcantara leather. The Supersports badge can also be found on multiple panels and fitting both on the outside and the inside of the car. A convertible option would also be available for those who prefer the wind blowing in their hair while cruising on back roads or highways.

The Third Version Is The Best Version

Carbon fiber splitters and rear diffusers can also be seen on the outside. An optional rear spoiler is also available to buyers. Bentley Motors CEO, Wolfgang Dürheimer, said that the Supersports name is one that excites, impassions and thrills. The first Supersports was made in the 1920's, and another version came out in 2009. The 2017 Bentley Continental Supersports is the third iteration of the legendary British muscle car. Price range for the car starts at $296, 025 dollars for the coupe, and a staggering $325,325 for the convertible version.

Everything You Need To Know About The Ferrari’s New Car, The Ferrari SP 275 RW Competizione

Ferrari builds a one-of-a-kind supercar built from components based from the Ferrari F12berlinetta. This Ferrari car defines exclusivity at its finest while still holding supercar performance with a classic taste.

Pagani would finally unveil the much-awaited Huayra Roadster that the car company had announced last year. The hypercar would also feature a removable roof version that would make it much lighter.

Classic BMW M1 Found After 34 Years Inside A Garage

Mint Classics just found a treasure packaged in a rare BMW M1 supercar that has been stuck in a garage and has not seen the light of day for more than three decades.

The New Aventador S Is Lambhorgini's Most Fun Supercar Ever

Anyone who gets to drive the $422,000 Lamborghini Aventador S will get a kick out of it.

The 2018 Bentley Continental Supersports Is Surprisingly Sleek And Agile