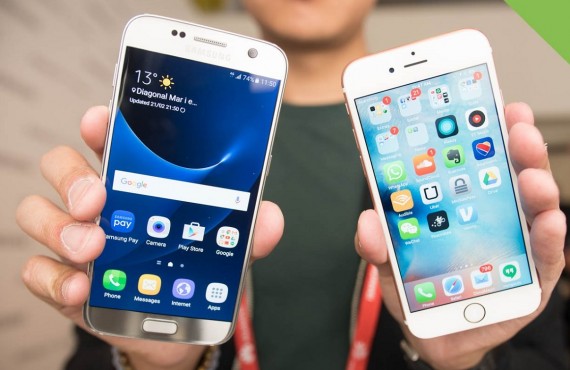 While there are many Android phones as the Galaxy S8 or the Huawei Mate 10, which are soon to be released, the Cupertino company will launch this year the highly-anticipated iPhone 8.<br /> (Photo : Android Authority/YouTube)

One of the greatest rivalries in the tech world right now is the one between the iPhones and Android phones, given the fact that these are the most important mobile devices right now, and customers tend to compare it in every single field possible. Although Apple´s smartphones have proved to be more than extraordinary, there are any reasons to believe that the Android phones are better for you.

It´s a fact that one of the most important details of any mobile is the price, not only because of a matter of which is cheapest or most expensive but also because this is an issue that usually has a lot to do with the specs and features of a mobile device. And if there´s one that cost a lot only because it has a fingerprint sensor and you don´t care about this device, you can choose another that doesn't have it and pay less.

Naturally, this is one of the most important differences between an Android phone and an iPhone, since there´s no way you can do this with Apple´s mobile devices considering that there´s no variety. In short, it can be said that the exclusive nature of Apple´s products is its biggest weakness when comparing it with the Android phones on this specific field, which is something that in the smartphone business means a lot.

Having the freedom of choosing whatever you want is something quite important even if the product you´re receiving is almost perfect, given the fact that having the possibility of customizing anything is one of the keys to making any tech product a huge success. Believe it or not, this is also another field in which Android phones excels the quality of the iPhones, given the fact that while the Cupertino giant wants to keep control of default apps to maintain an unchangeable hardware and software experience, the Android allows you to pick the level of customization you want.

And of course, we´re talking about something that extends from things like live wallpapers to custom ROM installs or even alternative keyboards. Unfortunately, this is something that Apple´s iPhones doesn't offer, and even less popular brands as Xiaomi, Moto Maker and even LG does. This is such an incredible advantage that Android phones has over the iPhones that even Apple lovers recognized it.

Android Phones Has More Free Apps And Games Than iPhones

There´s no doubt that apps are one of the most important things in many devices as the smartphones or the tablets, being so popular that if one of these products wants to succeed in the market and meet customers' expectations, it needs to have the maximum amount of free apps, otherwise, it would be a failure even if it has great specs and features.

Believe it or not, this is another field in which Android phones are much better than iPhones, given the fact that it offers more free apps and even games, which is something great for those users that loves to gaming on their mobile devices. In fact, the difference is so pronounced that there are some apps and games that while you have to pay it in the iPhones, it comes for free with any Android phones, including the latest Samsung´s flagships.

Nokia 6 Could Be Released Any Time Soon; Availability Exclusive Only In China?

Although it´s not known if the Nokia 6 could be launched globally, this is a phone that even when its specs are not flagship material, it still represents greatness in quality.