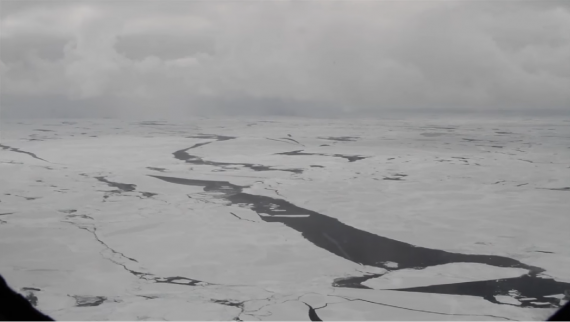 As Coronation Glacier on Canada's Baffin Island retreats, it has left behind a new island. Scientist hopes it will not dissappear like the other island that merges after glacial retreat. (Photo : NASA Goddard/YouTube)

The island, noticed with satellite imagery, is made of loose dirt and rocks dumped by the slow-moving river of ice. Characteristically, a glacial island like this will wear away after the glacier stops suckling it with new sediment, glaciologist Mauri Pelto wrote in the American Geophysical Union blog, "From a Glacier's Viewpoint." The new island, still, might endure, per research by Pelto, of Nichols College in Massachusetts, and his colleagues. "The size of the island stretches it the potential to survive, based on satellite pictures," Pelto wrote.

As Coronation Glacier On Canada's Baffin Island Retreats, It Has Left Behind A New Island

The Coronation Glacier is on the Cumberland Peninsula of Baffin Island, most of which sits in the Arctic Circle. The glacier is the prime outlet for the Penny Ice Cap, per Pelto. For years, the glacier has been on the withdrawal. Scientists reported in a 1992 study published in the Canadian Journal of Earth Sciences that the station of the Coronation Glacier recoiled an average of 39 feet (12 meters) per year between 1890 and 1989, according to the National Snow and Ice Data Center.

Pelto and his colleagues were concerned in how the glacier had been faring since then. Using satellite broadcasting imagery from 1989 to 2016, they found that the glacial retreat has been fast moving. In those 27 years, they reported, the middling loss, or retreat, has been 98 feet (30 m) each year.

The total retreat since 1989 has been 3,609 feet (1,100 m) on the north side of the fjord into which the glacier empties, Pelto wrote. On the south side, the retreat has been 1,640 feet (500 m). This uneven retreat has changed the landscape sporadically over time. In 1989, for example, there were two islands of glacial residue at the terminus of the glacier on the north side of the fjord. By 1998, the retreating glacier had pulled away from those islands, and the more northerly of the two was now eroded away, Pelto wrote. By 2000, the more southerly island was gone, too.

In 2016, the undercurrents of the glacier had created a new island near the southern edge of the glacier's end. This position specifies that the glacier's discharge has shifted from the center of the sluggish river of ice to the south, Pelto wrote. The island is bigger than the ones that vanished in 1998 and in 2000, he wrote, so it might be a supplementary- lasting feature in the fjord. "A visit to the island would be desirable to shed light on its possible for enduring," Pelto wrote of the island.

The spit of land may persevere, but there is increasing suggestion that much of the glacier and the Penny Ice Cap will not. The investigators found that the snowpack is lessening near the glacier, following a trend that scientists have been recording since at least 2004.

The Arctic has been heating up twofold as quickly as the rest of the planet. In November 2016, parts of the region temperatures 36 degrees Fahrenheit (20 degrees Celsius) that is above normal. With such heat, Arctic sea ice construction stalled and briefly retreated. In 2008, researchers reported that Baffin Island's ice cover was at its lowest amount in 1,600 years and might vanish completely by the middle of the 21st century.

Everything You Need To Know About How And Why Climate Change Has Been The World’s Biggest Risk, According To A WEF Report

With the impacts of global warming being felt everywhere around the world, the World Economic Forum reports that climate change is now the world’s biggest threat. Is it too late for us to save our planet? Can we still do something about this condition? Here’s what experts have to say

This Is Why Global Warming Is Not Slowing Down: Are We Getting Any Safer? Details, Inside

With the growing claims about global warming and its effects being felt across the globe, a new study claims and gives us the reasons why we should not believe to the idea of global warming. Does that make the our planet earth safe then? Find out what authorities have to say