Super Bowl 2017: Find Out Where You Can Stream This Sunday's Event 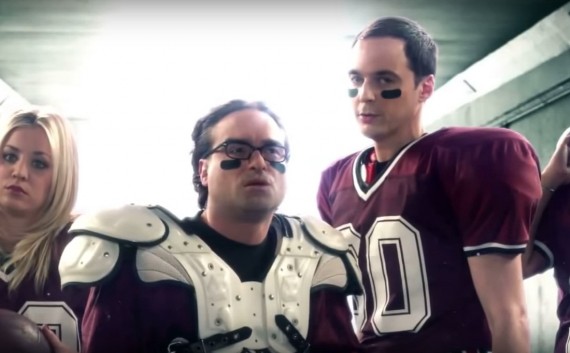 The 2017 Super Bowl LI will be happening this weekend and you probably live far away or is just so busy that you can't go. Well, here is a list of options as to where you can watch the big game. (Photo : the-big-bang-theory.net/YouTube)

Gear up, guys, the 2017 Super Bowl is coming this weekend and just like every year it is going to be the most-watched night of television. So, what are the options to watch if you don't have tickets and just want to sit at home and chill?

First choice would be the Fox Sports Go website or the Fox Sports Go app where you can stream the Super Bowl LI live and it doesn't require a TV subscription to access it. Fox also will be turning off the authentication for the game, so users can pretty much navigate to the relevant page and start watching.

However, there is a little issue that you might want to know. Due to the league's restrictions, you won't be able to stream the Super Bowl via the Fox Sports Go app on your Android phone. But on the bright side, Android Tablets are exempted from this - that is if you have one.

The second choice will be AT&T's DirecTV service. With this, users will be able to stream the game to their phone in Atlanta, Austin, Charlotte, Dallas-Ft. Worth, Detroit, Gainesville, L.A., Minneapolis, New York, Orlando, Philadelphia, Phoenix, San Francisco, Tampa and Washington D.C.

The bad news? Yeah, there is always a bad news when something seems too good to be true. Reportedly, it can only be streamed via Wi-Fi connection, so watching the game on the road could possibly not be an option for many.

For Verizon subscribers, they are the lucky ones. With the NFL Mobile app on their phone, they can watch the game via Wi-Fi or mobile data.

For this part, there is a little trick that you need to know before watching the game on this platform. Well, if you don't have a subscription, you can sign-up for a free trial of the PlayStation Vue which is technically Sony's live TV streaming device.

Now here is the tricky part: just be sure to cancel the free trial subscription after the game is over. Shh...you didn't hear it from me.

This is one cool way of watching the 2017 Super Bowl. You can watch the game either with your Google Cardboard or with the Samsung Gear VR (whatever you have or prefer) via the Fox Sports VR app. To access the game, you might need a cable subscription or at least the log-in details.

For People Outside The U.S.

There are a number of apps and TV services available for people outside the U.S. For the viewers in Canada, they have CTV, in UK they can watch it either on BCC or Sky, Australia got Seven Network and Foxtel, while Canada has Sky.

The Super Bowl LI is on Feb. 5 and it will be held at NRG stadium in Houston, Texas. The teams to play will be the Atlanta Falcons and the New England Patriots. It will start at 6:30pm Eastern, on Fox. And for the ladies, pop star Lady GaGa will be the performer for the halftime event.

Apple has finally rolled out the iOS 10.3 Beta 1. Its new features are Theatre Mode, and Find My AirPods, to name a few. Click to know everything about it.

Why You Should Stop Using The Phenomenal Meitu App

The Meitu app has been around since 2008. It's popularity skyrocketed after its latest update which allows users to transform their your photos into an anime-like character for free.

The Pipo X10 Is Both A Tablet And A TV Box, Should You Buy It?

The Pipo X10 is both a tablet and a TV Box. It gives the user the option to choose either running it on Android 5.1 or on Windows 10. It features 64 GB internal storage and 4 GB of RAM.