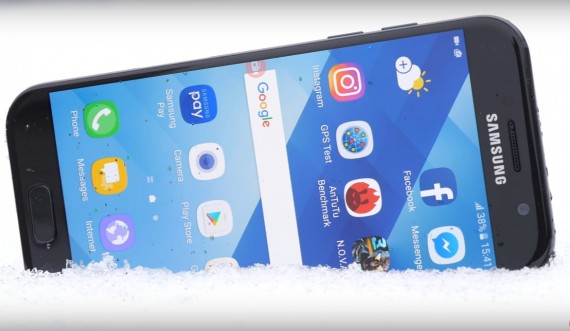 The Samsung Galaxy A5 2017 is a smartphone that is a bit cheaper compared to the Galaxy S7. Though it is a mid-range phone, it has the specs and features that could be close enough to be considered a flagship device. (Photo : TechLineHD/YouTube)

The Samsung Galaxy A5 2017 is an enhanced version of its predecessor that was released last year. This device costs at $450, depending on where you buy it.

The Samsung Galaxy A5 pretty much looks like a flagship phone. In fact, it is quite similar to the Galaxy S7. It features a metal chassis and metal buttons. The device itself is covered with an unspecified corning gorilla glass both at the front and back. It has a body dimension of 5.75 x 2.81 x 0.31 inches and weighs 157 grams.

As usual, the gorilla glass featured in the Galaxy A5 attracts fingerprints quickly. The great thing regarding about this device's beautiful premium-looking design is that it has an IP68 water and dust resistance feature, which means you can dip this phone to water for 15-30 minutes.

The Galaxy A5 features a 5.2-inch super AMOLED capacitive touchscreen with a screen resolution of 1080 x 1920 pixels. Though it is not as good as the Galaxy S7's screen, its screen quality is sharp, colors are vibrant and is also surprisingly quite bright for both indoor and outdoor use. It also has an always-on feature.

Sadly, the device runs on Android 6.0.1 Marshmallow, not Nougat. It is packed with an Exynos 7880 chip which is a good chip nonetheless. For its software performance, opening and using apps runs smoothly without encountering any issues at all. And as for its gaming performance, it is capable of playing graphically high intensive games and it does not overheat after 30 minutes of gaming.

At the back, the Galaxy A5 features a 16 MP camera with an aperture of f/1.9. It doesn't have an optical image stabilization and is also not capable of recording 4K videos. The only catch aside from not recording in 4K is that it is a bit shaky due to the lack of image stabilization.

Regarding the picture quality, day shots are great with lots amount of details, sharpness and colors. Shots taken under artificial lights are also great, but you have to make sure your hands are steady. As for low light condition shots, it's average at best. However, considering the price tag of this phone, it is somehow not acceptable.

At the front, the Galaxy A5 also features a 16 MP camera with an aperture of f/1.9. It is capable of taking incredible selfies, but it doesn't have an autofocus feature, so if your face is not in focus, the pictures taken will end up looking soft. As for its video recording, same applies to the rear camera's performance.

The Galaxy A5 is powered by a 3000 mAh battery. With moderate use, the battery life can last of up to roughly 2 days, which translates into six hours of screen-on time. For its charging speed, the phone itself can charge from zero to full battery within one hour and 15 minutes with the use of the stock charger.

New Samsung Smartphone 'SM-G615F' Appears On GFXBench, Is This The Galaxy On7 Pro Successor?

A new mid-range Samsung smartphone labeled as model number SM-G615F surfaced in the GFXBench database and is said to be the successor for the Samsung Galaxy On7 Pro.

Best Features Of The Samsung Galaxy S7 On Android Nougat

Here is a list of the best features that the Samsung Galaxy S7 on Android Nougat offer.