The World Without Net Neutrality: Bigger Players Getting Bigger? 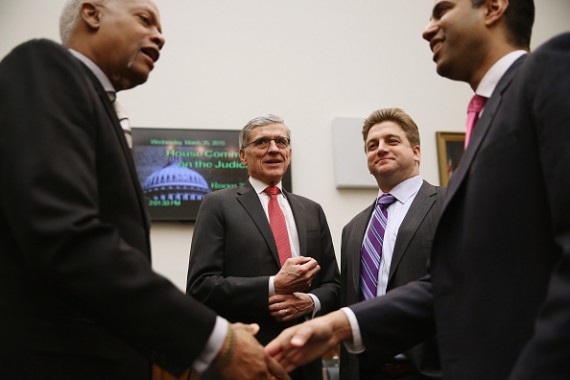 For several weeks now, net neutrality has been a hot topic of discussion in the tech industry. It began with President Donald Trump's appointing of Ajit Pai as the new chairman of the Federal Communications Commission. Pai has since been very vocal about his plans to change the various projects and regulations put in place by the former administration.

The former FCC chairman, Tom Wheeler, established the Open Internet rules in 2015. The entire goal of the same is to provide internet users with a consistent service no matter where they are and no matter what they want to see. As such, broadband providers are unable to block specific pages or create special fast lanes for content. This principal is what makes up net neutrality.

But with Pai at the seat, this might all change. As IBTimes noted, the newly appointed executive has often called net neutrality as a "regulatory overreach" and has called on the FCC to remove specific regulations that he himself considers as obstructive. The entire principal of net neutrality has not been erased, but there are concrete steps that have started to blur the lines.

Those who opposed the removal of net neutrality, and Pai's administration in general, fear that the fate of internet will no longer lie in the hands of regulatory bodies but in the hands of providers. As such, providers would theoretically have the freedom to package their services in any way that they see fit, no matter how much it might disadvantage their competitors and thereafter their users. The incentives for startups and smaller players would be stifled in the midst of big player moves.

Theoretically, what could happen is that the bigger players will block all small players out of the market. Even if start-ups get their foot into the industry, it is unlikely that they will survive long if they are unable to provide the same level or service. "If net neutrality did not exist in 2004, MySpace would pay for faster access to customers and Facebook might never have caught on," said Nathan White, a senior legislative manager of organization Access Now, a digital rights activist group.

On the other side, those that are on board with Pai's administration argue that the removal of such strict restrictions and conduct will actual foster positive competition. They argue that what could result are services that are the best that they can be because there are no restrictions holding them back. Arguably, the bigger players will be able to provide their best without having to consider the smaller players.

Good or bad, Pai's administration is taking action - that is sure. And as Engadet reported, the new FCC chairman is doing exactly what was expected of him. The executive, an ex-Verizon lawyer, has also started the process of altering a few other regulations. Like the above, the positives and negatives of the same are up for discussion.

Pai has also made the first moves to suppress an old FCC project that would reform the set-top box market. He also wants the FCC to be much more transparent than it used to be by making its agendas known to the public prior to meetings. The idea, as Pai explained, would be an FCC that shows the public how it operates and it would also increase public engagement.

What Is Net Neutrality And Why is FCC's Ajit Pai Against It?

Ajit Pai, who President Trump appointed as the FCC Chairman for his term, has been under a lot of scrutiny for his quick turnaround in terms of previous rulings and practices. Net neutrality being one of them.

While Snapchat currently has an IPO worth US$3 billion and is one of the brightest gems in the apps market, it was never actually expected to succeed - not by a long shot.

The Federal Communications Commission has advised as much as nine companies that they can no longer provide broadband usage services under a federal assistance program, requiring households to pay more for internet services.