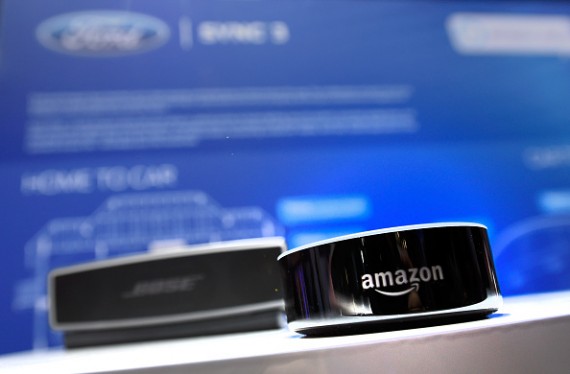 LAS VEGAS, NV - JANUARY 05: An Amazon Echo device is displayed at the Ford booth at CES 2017 at the Las Vegas Convention Center on January 5, 2017 in Las Vegas, Nevada. Ford is incorporating the voice operating device into its vehicles. CES, the world's largest annual consumer technology trade show, runs through January 8 and features 3,800 exhibitors showing off their latest products and services to more than 165,000 attendees. (Photo : David Becker/Getty Images)

Artificial intelligence is not just a thing of the future anymore, the technology is already in the hands of billions of people around the world. And in the homes of thousands, there lies either the Alexa-powered Amazon Echo or the Google Home, which acts pretty much like a digital assistant. And while the technology is focused on moving forward, both Amazon and Alexa is now looking to the past for inspiration.

According to Engadget, Amazon and Google are looking to add a new calling skill into their respective smart speakers. Theoretically, users will be able to make and receive calls on the platforms, but how it will do is still unclear. Both companies do, however, have the potential to make it a reality.

As the publication continued to report, Amazon already has existing communication platforms, such as the videoconferencing tool Chime. On the other hand, Google has Hangouts, Duo and Google Voice. Of course, there is the possibility that both companies will add other third-party services to their lineup. Another possibility is that the Echo and Google Assistant could be fitted with their own numbers, or the ability to sync with an existing one.

Adding a call skill, however, poses its own set of problems. For instance, Alexa and Google Home both have always on microphones in case owners will shout out commands. But more than these, the smart speakers are constantly recording. Amazon will only reportedly keep tabs on call metadata, but it is unclear how Google will go about everything.

The exclusive use of voice commands also poses as a problem. If making and ending a call is done through voice commands, it is possible that a call will be started or will be stopped prematurely in the course of conversation. Evidently, both Amazon and Google will need to think things through thoroughly before actually releasing the skill to its smartspeakers.

At the very least, it will be an interesting battle to watch. Ever since Google Home entered the market, there have been questions about whether or not it will ever or has already taken reign of the smartspeaker-sphere, an area that has long been controlled by the Amazon Echo. There is debate about the same and how each company decides to go about the new calling feature will also be a point of discussion.

At this point, however, Observer has reported that the Amazon Echo has more tricks up its sleeve than Google Home. The logical reason for this is that Alexa has been on the market an entire two years before Google Assistant began to roll out. But as the publication argued, Google is already arguably smarter than its biggest competition.

Numbers aside, Google Home has the ability to provide information because Google has a hand in most individuals' lives in a way that Alexa nor Amazon do not. Google's cloud is the reason for this, as consumers make appointments and note birthdays on platforms beyond Google Home. But because of the cloud, the same information is transferred anyway.

The publication went on to state that it might not be long until Google Home catches up to the Echo. Likewise, Amazon is under pressure to keep improving its device. And the race to add a calling feature might just be the finish line - for now, anyway.

Ever since it was announced, Google Home has been compared to the Alexa-powered Amazon Echo. With more than two years to make up for, it might need to take some catch up shortcuts.

Lenovo has always focused more on hardware and has therefore relied on software specialists instead. As Amazon is arguably the leader in smart home management, Alexa is the residing AI in the new Lenovo Smart Assistant.

The ASUS Zephyrus With GeForce GTX 1080 Max-Q has a pricetag of $2,699 that comes with powerful specs and impressive features.