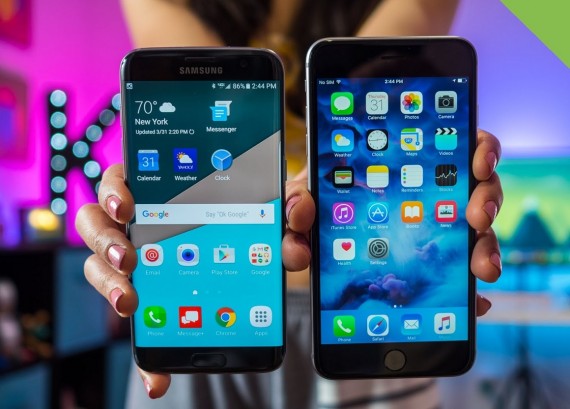 Although is not known how the Samsung Galaxy S8 and the iPhone 8 would perform in 2017´s market, many believes that Apple could recover its position as the bigger smartphone maker in the world. (Photo : Android Authority/YouTube)

Smartphone business is a rough game, and even when the most important companies shows great respect between them, the competition is so rough that the most important goal is to scale positions no matter what. Naturally, the greatest rivalry in this business is the one between Apple and Samsung, given the fact the fact that both are the largest smartphone makers in the world. Although the gap between the South Korean giant and the Cupertino company was really big, things have change to the point in which the difference is now minimal.

According to the market figures of Gardner, Apple managed to top the global smarphone market in fourth quarter of 2016, which represent the closest position between both companies since Samsung became the bigger smartphone maker in the world. Naturally, this is something that increase expectations in flagships Galaxy S8 and iPhone 8, considering that these numbers will become the background of a new competition that seems more spectacular than ever, since these mobile devices could be the greatest o all times.

In fact, Apple sold 432 million smartphone units worldwide in the quarter, which represent up 7 percent year-on-year. Naturally, this was something that pushed the company´s total sales last year to almost 1.5 billion units, up 5 percent from 2015. Of course, this clearly shows the way in which the Cupertino company has increase its famous quality in making outstanding sales, even when the latest flagship iPhone 7 failed to meet expectations among the users.

Actually this was a really disappointing situation, considering that it was expected that Apple could take advantage of Samsung´s fiasco with its Galaxy Note 7, which had to be recalled because of a series of explosions that threatened its customer's life. Nevertheless, the numbers reveals that even when Apple couldn't make the mayor hit, it managed to close the distance with Samsung.

According to the figures, the South Korean firm saw its sales drop 8 percent fo the fourth quarter, managing to clock a second consecutive quarterly dip and decreasing its share down by 2.9 percent year-on-year. In fact, the Galaxy Note 7 fiasco actually played a major role in this concerning situation for Samsung, since the discontinue sales of this mobile device left an important gap in the large-screen phone range.

Believe it or not, this weak stance of Samsung helped Apple to climb ahead to assume the pole position in 2016´s fourth quarter, which represent the first time in eight quarters that the Cupertino company had led the global market. In fact, Apple held a narrow lead of just 256,000 units ahead of the South Korean giant.

Huawei Could Close The Gap With Apple And Samsung Next Year

On the other hand, Chinese firm Huawei also managed to achieve great numbers in last year´s fourth quarter, to the point in which this smarphone maker was able to saw its sales leap by 26.7 percent. Naturally, this was something that made Huawei increase its share of the smarphone business to 8.9 percent in 2016 from 7.3 percent in 2015.

According to Gardner´s analyst Annette Zimmerman, even when the gap between Samsung and Apple with the Chinese smartphone maker is still huge, these numbers clearly shows the way in which Huawei will become its new main rival, to the point in which is quite possible that this brand could close its distance with both giants at the end of this year.

The Most Incredible Cyber Strikes Ever Made By Anonymous

Recently, Anonymous declared war on U.S. president Donald Trump, which clearly represent another chapter in the rough relationship that the White House has established with these organizations in the last years.

Everything You Need To Know About Wireless Charging

Although is highly expected that future mobile devices comes with the wireless charging, what remains as a huge mystery is if other tech products would also be equipped with this particular feature.