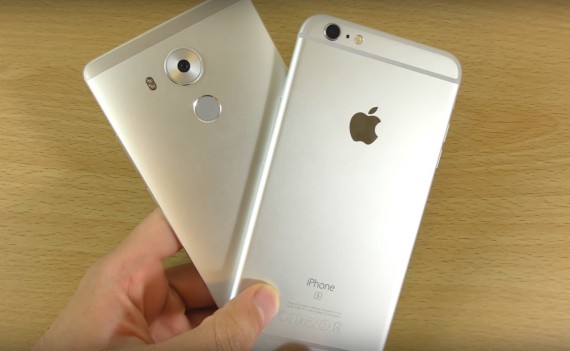 The Huawei P10 Plus and iPhone 8 are both highly anticipated smartphones this year. Here's the latest news and rumors about them. (Photo : Tech Trinkets/YouTube)

Set to be released this year are the Huawei P10 Plus and iPhone 8 (aka iPhone X), which are both highly anticipated by many consumers and tech enthusiasts alike. So, what are the latest news regarding these two smartphones?

The Huawei P10 Plus is expected to be unveiled at the upcoming Mobile World Congress that is set to be held at Barcelona. Alongside the premium device, will also come the Huawei P10. As for the iPhone 8, there are no reports yet of its specific release date and its unveiling date is anybody's guess.

According to reports, the Huawei P10 Plus will sport a rear fingerprint scanner and a physical home button. Recent leaks have also suggested that it will have a dual-curved display, making it possible to have a flat-screen and a dual-curved edge screen akin to Samsung phones.

For the iPhone 8, a report was published by Forbes detailing Ming-Chi Kuo's leaks for Apple premium flagship phone. According to the report, the physical home button will be non-existent and instead will be replaced by a "function area" that is similar to the touch bar on the 2016 MacBook Pro. Previous reports also suggested that the iPhone 8 could have an all-glass design.

The Huawei P10 Plus is said to feature a 5.5-inch Quad HD display. As for the iPhone 8, latest reports suggest that it will have an almost bezel-less screen (like we never heard that before). This time, the screen itself will be 5.8 inches big, but excluding the function area (mentioned at the design section) it will be 5.15 inches.

The Huawei P10 Plus is expected to run on Android 7.0 Nougat and will be packed with a Kirin 960 processor. As for the iPhone 8, there is no new information about it aside from the previous reports months ago.

The Huawei P10 Plus is said to have a 6 GB of internal memory coupled with 4 GB RAM variant and a 128 GB with 6 GB RAM. On the other hand, the iPhone 8's internal memory specification is still unknown.

According to rumors, the Huawei P10 Plus is said to have an impressive camera module. It is said to possibly have 12 MP dual-lens camera and an 8 MP front camera, with both lenses tagged with Leica branding. As for the iPhone 8, there are no latest updates for its camera except for the old rumors. Hopefully, it will be an upgrade to the camera module of the iPhone 7 Plus.

The Huawei P10 Plus is said to have a 3,100 mAh battery. On the other hand, recent leaks suggested that the iPhone 8 will have a 2,700 mAh L-shaped 2-cell battery pack.

On the latest rumors of the Huawei P10 Plus, it seems that most high-end smartphones are upping their security features. For Huawei, it is rumored that there could be a slight chance that the P10 Plus could have an iris scanner. Meanwhile, the iPhone 8 will have new biometric technologies, and the possible rosters could be facial recognition and iris scanning. Aside from that, previous reports suggest that it could have quick charging and wireless charging.

We've been hearing so many rumors about the Huawei P10 and OnePlus 5 lately. Here are all the things you need to know about the two devices.

The Huawei P10 Plus and the Samsung Galaxy S8 are both premium smartphones that are set to be released this year. Both of them comes with two variants with mind-blowing specs and features worthy to be considered as one of the best flagship phones of 2017.