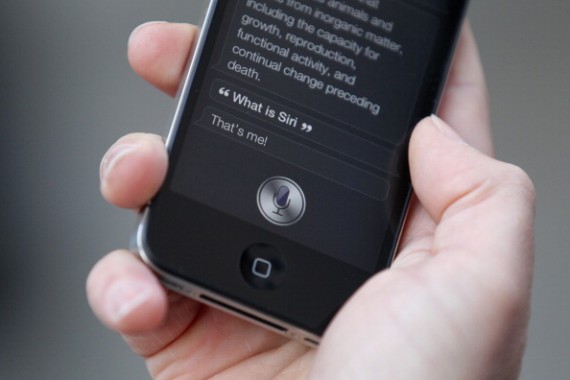 LONDON, ENGLAND - OCTOBER 14: A man uses 'Siri' on the new iPhone 4S after being one of the first customers in the Apple store in Covent Garden on October 14, 2011 in London, England. The widely anticipated new mobile phone from Apple has seen customers queue in cities around the world for hours to be amongst the first to buy the device. (Photo : Oli Scarff/Getty Images)

Artificial Intelligence, in all of its available forms, is a big thing for today's tech world and this is evidenced by the time some of the biggest companies have invested in developing the technology. Amazon's Alexa, Google's Google Assistant and Apple's Siri are currently leading the pact, but the Cupertino-based giant is not about to copy its competitor's moves. The public should not expect a Siri-powered smart speaker from the company.

As noted by Time, Siri has become an integral part of most of Apple's products, including iPhones, Macs, Apple TCs and motor vehicles via the company's CarPlay platform. Most individuals are likely to have conversed with the AI in one form or another, for one reason or another. Nevertheless, Apple has no plans of creating a product that is designed solely for Siri.

The publication, which spoke with the company's executives, has estimated that the company's priority is really to make Siri an omnipresent AI assistant. That is, present and readily available across all platforms instead of producing a separate device to serve as an AI machine. The plan, however, does not rely on just an ever present feature.

As the publication continued, Apple has plans to make Siri a control hub for all its smart home devices, as evidently proven by the AirPods. AirPod owners can access Siri with just two taps on one of the earbuds, which is important because it gives users a hands-free way of accessing the technology. With this partnership, users can send text messages, choose music and ask questions without the added frustration of having to type away.

Whether or not the company's strategy to dominate the AI space will be effective or not is still to be seen. Its unique approach might reap some real long-term benefits, although many consider Apple behind as of now. It does, after all, have some stiff competition in Google and Amazon and the industry itself is expected to grow exponentially in the next few years.

According to Daily Item, the AI Market is expected to grow into a US$12 billion industry by 2024. "There's a tremendous amount of promise for these agents to find and assist with many different tasks that we face every day," the publication quoted Ross Rubin, principal analyst at Reticle Research. He further went on to say that the deciding factor about who will rule the industry is dependent on how much these virtual assistants can help with.

At this point, Google and Amazon arguably are in the lead with their Google Home and Amazon Echo products, which are powered by Assistant and Alexa respectively. Both are capable of streaming music, play audio books, control a handful of smart-home devices and answer questions. And while alone this is remarkable at this stage, there is still a long way to go. The end goal is a virtual assistant that is capable of anything and everything asked of it.

The publication also went on to say that it is vital for these virtual assistants to understand and learn the needs of their users. User preference and behavior are important in determining whether a device is important and effective. And while it is likely to be a race among Apple, Google and Amazon, it is unclear at this point who will actually take the lead.

How To Take Advantage Of Google Assistant On Pixel; AI To Debut In Other Smartphones

When the Google Pixel and Google Pixel XL handhelds were released, a large part of their appeal was that it was exclusive to the company’s AI – but that might no longer be the case.

The world of artificial intelligence continues to expand and while the future is the priority, Alexa and Google Home are starting to welcome a few things of the past too.