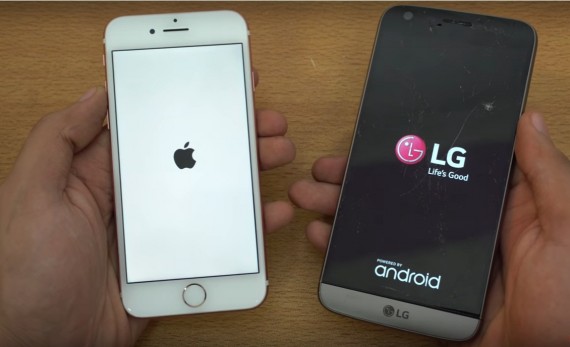 According to the leaks and rumors, the iPhone 8 will have a 3D front camera while the LG G6 will have a 100-degree front camera and a 125-degree 13 MP rear camera. (Photo : XEETECHCARE/YouTube)

The iPhone 8 and LG G6 are both high-end smartphones set to be released this year. Though they have not yet been released and shrouded with leaks, rumors and reports, especially the iPhone 8, what we are hearing about their "supposedly" camera specifications seem to intriguing that we just can't wait to have it and test it.

About The iPhone 8's Front Camera

According to 9to5Mac, Apple's iPhone 8 is going to feature a major upgrade to its front camera. No, it is not the typical dual-camera system that is found in the iPhone 7 Plus' dual camera system. Instead, the OLED iPhone itself will include a "revolutionary" front camera and infrared module that can sense the 3D space in front of it.

So, if you're for the next step of selfies, the iPhone 8 can provide that thirst of yours finally. Apparently, the iPhone 8 can generate a 3D selfie. Take the anime Sword Art Online for example, the Nerve Gear was used to generate the exact facial features of the owner to put it in the owner's character. However, in the iPhone 8's case, the combination of the front camera and 3D sensor would allow the iPhone to generate a 3D selfie that could be used in augmented reality or could be used in innovative games what will replace the character's head with that of the user.

The hardware is said to use algorithms developed by Primesense, which makes its sensor capable of detecting the location and depth of objects it can see. The iPhone 8's 3D sensing front camera also uses a dedicated infrared transmitter and receiver. And with its 3D system, it works by sending invisible IR light signals outwards from the phone and then detecting the signals that bounce back off of objects using its 1.4 MP IR receiver.

In regards to what rear camera will the iPhone 8 have, there was no mention about it. However, the report states that future iPhone devices could likely add 3D sensing rear cameras and potentially remove the need for large dual-camera iris systems.

For the LG G6, the device itself is reported to feature a 100-degree front camera and 13 MP 125-degree dual rear cameras. Compared to the dual rear camera setup of the iPhone 7 Plus, it is quite different. With the iPhone 7 Plus, its dual camera system is paired up with one full color sensor and another monochrome sensor, thus giving it great contrast photos and better low light output. As for the LG G6 camera setup, one camera is used for wide-angle shots while the other is for taking regular shots.

Apparently, the also upcoming LG V30 will have a similar dual camera system of the LG G6. However, in the case of the LG V30, it will be grander, because recent reports suggest that the LG V30 will have a dual camera system, both in the front and rear. Among other similarities between the LG G6 and LG V30, both phones are also said to have an upgraded version of the Quad-DAC, but did not specify if it's the same.

Though the LG G6 is a smartphone that is worth praising for its rumored amazing dual camera specifications, it pales in comparison to the LG V30 rumored specs and features.

Expected this year are the LG V30 and Asus Zenfone 3 Go; LG's 2017 phablet flagship and Asus' mid-range phone from its Go line. Here are the latest news and leaks of the said phones.