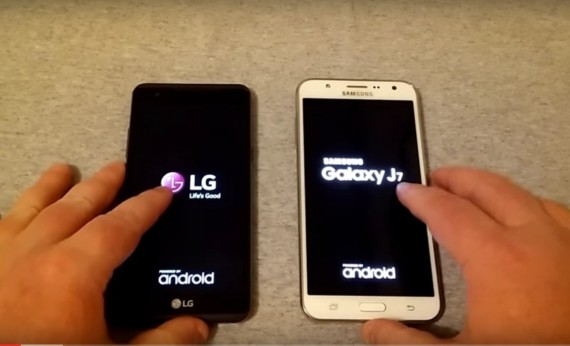 Both the X Power 2 and Galaxy J7 (2017) are set to be released this year. Based on the news, leaks and rumors, it seems like the X Power 2 is quite the catch. (Photo : CV Tech/YouTube)

The LG X Power 2 and the Samsung Galaxy J7 (2017) are two mid-range smartphones set to be released this year. Based on the recent leaks gathered, it seems that LG's X Power 2 seems more interesting than the other phone. With that being said, here is why the X Power 2 could be better than the Galaxy J7 (2017).

The Design And Features

You must have heard it at least once in your life that using a smartphone, laptop or any digital viewing device before going to bed is not a good idea. Well, the X Power 2 comes with a feature called Comfort View that reduces the amount of blue light emitted by its display. This is good news for people who love to read e-books or any other form of content, because blue light is known for causing eye fatigue as well as the culprit of keeping you awake at night. The phone itself is also offered in four casing color variations; Black Titan, shiny Titan, shiny Gold and shiny Blue.

As for the Galaxy J7, there were no mentions of it having a feature similar to the Comfort View. However, the device is expected to have a few goodies on board such as the 4G LTE, GPS, Bluetooth 4.1 and Wi-Fi. Regarding if it will have a fingerprint sensor embedded in its home button, it is not sure yet, but hopefully this time there will be. This smartphone is also expected to come in Black, White and Gold, just like its predecessor.

LG has claimed that the X Power 2 is the ideal phone for a power-heavy multimedia user and gaming enthusiasts.  Thanks to its 4,500 mAh battery and the mid-range display specifications that it is equipped with. In regards to how well its battery can perform, the company has assured that it can offer 15 hours of continuous video playback, 14 hours of GPS usage or 18 hours of web browsing. In addition, it also has a fast charging feature that can charge from zero percent to 50 percent within one hour.

For the Galaxy J7, there isn't any information yet regarding its battery. But based on the previous model, the Galaxy J7 2016 which had 3,300 mAh battery, the battery performance was quite good for a mid-range smartphone.

The X Power 2 features a 5.5-inch IPS LCD display with a screen resolution of 720 x 1280 pixels. Meanwhile, the Galaxy J7 is rumored to have a 5.5-inch HD 720p 2.5D curved glass display. For this part, I will probably go with the Galaxy J7 2017, because its predecessor, the Galaxy J7 2016 had a Super AMOLED display and it was simply beautiful. The colors were fairly accurate, and the only thing that puts it down is it doesn't have an option where users could automatically set its brightness. But nevertheless, it still looks amazing.

The Platform And Memory

The X Power 2 will be running on Android 7.0 Nougat and packed with an Octa-core processor clocked at 1.5 GHz. It will feature two RAM variations with 1.5 GB and 2 GB with 16 GB of internal memory storage and a microSD card support of 2 TB.

On the other hand, the Galaxy J7 2017 is reported to run on Android 7.0 Nougat and is equipped with an Exynos 7870 for the global variant and a Snapdragon 425 SoC for its U.S. variant. It will feature 16 GB with 2 GB of RAM, no mention if it will have an expandable memory option. However, its predecessor, the Galaxy J7 2016 had 256 GB via microSD.

Though most of the specs and features of the X Power 2 have been leaked, LG has confirmed that it will have its official unveiling date at the upcoming Mobile World Congress (MWC). It will first be released in Latin America and then make its way to other key markets which includes the United States, Asia, Europe and other regions.

Meanwhile, recent leaks suggest that the Galaxy J7 may be unveiled sometime around March. As for the retail price of both phones, it is still kept under wraps. However, it was mentioned that LG will announce it when it will be available.

The iPhone 7 was no doubt one of the most powerful, expensive and amazing smartphones of 2016. But now that it is 2017, is it still worth buying?

LG X Power 2 is a midrange smartphone with massive 4,500 mAh battery promises offer up to 2 or 3 days of run time.