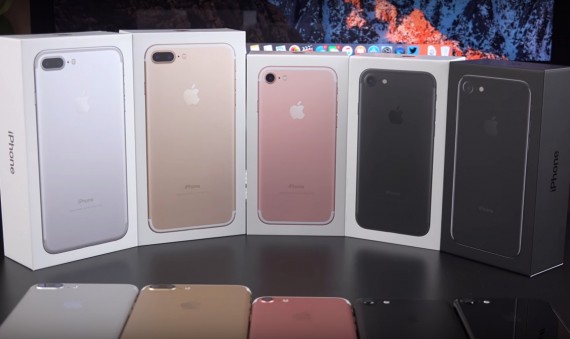 The iPhone 7 was no doubt one of the most powerful, expensive and amazing smartphones of 2016. But now that it is 2017, is it still worth buying? (Photo : DetroitBORG/YouTube)

For some people, having the latest iPhone, Galaxy, OnePlus or any high-end flagship phone means nothing at all. Instead, some people will wait it out like a year or two before even considering buying it. So, given that this year Apple will be releasing the iPhone 7s, 7s Plus and iPhone 8, is it time for you to ditch your dusty old phone and buy an iPhone 7 today?

For starters, the iPhone 7 does not have much any difference in terms of its design compared to the previous iteration, the iPhone 6s - heck, it was even reported last year that Apple was saving up their ideas for the iPhone 8 to commemorate the 10th year anniversary of the iPhone. It also doesn't have a headphone jack which means you will have to buy the wireless AirPods if you want to listen to music privately or watch those "feel good" videos for pleasure. Also, it costs more than the iPhone 6S, and last time I checked, the 32 GB variant retails at $649, the 128 GB variant costs $749 and lastly the 256 GB variant costs $849. However, despite these stingy price tags, the iPhone 7 still has many things to offer such as water resistance and an incredible quad-core processor.

It Is Built Quite Well, But...

The iPhone 7 features a metal casing that gives off the impression that it is nothing but premium. The phone itself measures 5.44 x 2.64 x 0.28 inches, weighs 138 grams, and has a water and dust resistant feature with an IP67 rating. Speaking about the IP67 rating, the phone can be submerged into water up to 1 meter under 30 minutes tops.

The display is a 4.7-inch LED-backlit IPS LCD with a screen resolution of 750 x 1334 pixels. For its OS, upon its release, the iPhone 7 came with iOS 10.0.1, packed with an Apple A10 Fusion chip (one of the best performance chipsets of 2016), a Quad-core 2.34 GHz for its CPU and a PowerVR Series7XT Plus (six-core graphics) for its GPU. Combined with all of this, the iPhone 7 shows no problems with software performance - and yes, playing high intensive games is buttery smooth as well.

Speaking about its software performance, the only thing that makes the iPhone 7 not really that appealing is its 2 GB RAM capacity. For me, having a 2 GB RAM phone in 2017 is a downgrade. I think 3 GB RAM is the minimal RAM storage for an "acceptable smartphone" in 2017. In fact, there are even smartphones both available and upcoming that offers at least 3 GB of RAM and cost less like the OnePlus 3T ($439 for its 64 GB model and $479 for its 128 GB model). Not only do some smartphones cost less, but they also offer one of the latest tech available.

In regards to upcoming smartphones, a good example is the Nokia 8 that is rumored to cost at around CNY 3,188 ($464). The device itself is rumored to come with a Snapdragon 835 chipset, a 5.7-inch Quad HD display with 1440 x 2560 pixels, 64 GB and 128 GB variants, and will run on Android 7.0 Nougat. While there is no information yet of its RAM capacity, one can expect that it will be a powerful phone nonetheless and could possibly be one of the top budget-friendly high-end phones of 2017.

In Case You Only Go For iPhones

Let's face it, to some people, the brand name is more important. This I can understand, because I am a Samsung fan myself - my last two phones were Galaxies. Well, if you're really adamant in purchasing an iPhone, you can either get an iPhone 7 now or save that hard-earned money of yours to buy the iPhone 8 instead.