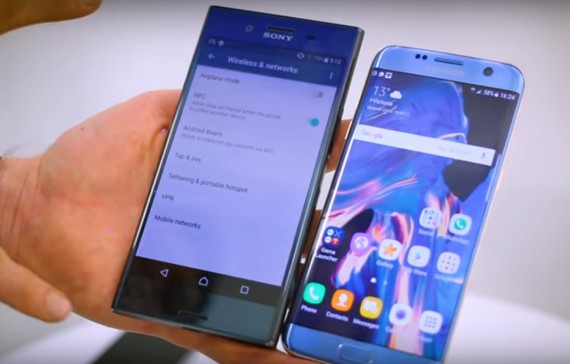 The Galaxy Edge S7 is considered to be one of the finest smartphones last year. With that being said, is the new Xperia XZ Premium up to the task of matching it? (Photo : Btekt/YouTube)

As you may have already heard, Sony has introduced the Xperia XZ Premium at the 2017 Mobile World Congress (MWC) and it is packing with some serious specs and features. Here is a quick comparison of the said device against the Samsung Galaxy S7 Edge.

The Xperia XZ Premium was recently announced at 2017 MWC and will be released this late spring. As for the Galaxy Edge S7, it was announced last year of February and released in the following month.

The Xperia XZ Premium features a body dimension of 6.14 x 3.03 x 0.31 inches and weighs 195 grams. It has an attractive glass display that Sony describes as a "glass loop" surface because the glass continues all the way around the device with metal caps only at the top and bottom. Its rear design is protected by a Corning Gorilla Glass 5 that could supposedly survive a 1.6-meter drop around 80 percent of the time.

Its rear design is mirrored which is quite handy if you want to check you reflection from time to time, but of course, it attracts fingerprints like crazy. It also has a water and dust resistant feature with an IP68 rating. One more thing, its FPS is embedded on its power button.

The Galaxy S7 Edge features 5.94 x 2.86 x 0.30 inches, weighs 175 grams and protected by a Corning Gorilla Glass 4. The phone also comes with an IP68 rating and features a combination of metal and glass, which looks sleek and premium but also, feels slippery and get a bit grubby too easily. Its FPS is built-in on its home button.

The Xperia XZ Premium features a 5.46-inch IPS LCD display with a screen resolution of 3840 x 2160 pixels and is protected by a Corning Gorilla Glass 5. It supports 4k HDR, giving it exceptional brightness, color, clarity and contrast.

The Galaxy S7 Edge features a 5.5-inch Super AMOLED display with 1440 x 2560 pixels. Just like its rear design, its front design is protected by a Corning Gorilla Glass 4.

The Xperia XZ Premium runs on Android 7.1 Nougat out of the box, packed with a Snapdragon 835 chipset and an Adreno 540. Thanks to its SD 835 chip, it is one of the first smartphones capable of Gigabit Class LTE, which means it can offer download speeds of up to 1 Gbps.

It supports graphics-intensive gaming and is compatible with the PS4, meaning you can play games from your console on the said smartphone. Lastly, it comes with Xperia Tips and Xperia Actions that offer you advice about the features you are using and also suggest downloads based on your location.

The Galaxy S7 Edge runs on Android 6.0 Marshmallow out of the box, which can be upgraded, to Nougat via OTA. Its U.S. variant comes with Snapdragon 820 while its global variant is equipped with an Exynos 8890 processor.

The Xperia XZ Premium features a 19 MP rear camera with predictive phase detection, laser autofocus and LED flash and a 13 MP front camera. It is capable of recording HDR videos at 2160p@30fps and 720p@960fps.

The Samsung Galaxy S7 Edge features a 12 MP rear camera with phase detection autofocus, OIS and LED flash. It has a 5 MP front camera that features dual video call and Auto HDR. It is capable of shooting HDR and dual-videos at 2160p@30fps, 1080p@60fps and 720p@240fps.

The Xperia XZ Premium is powered by a non-removable Li-Ion 3230 mAh battery and also comes with Quick Charge 3.0. Speaking of battery, the device also has a Smart Stamina technology that estimates how long your battery will last based on your normal usage and also if you're going to run out of juice later that day. Another is Battery Care that charges you device to 90 percent and waits then charges to 100 percent just before your normal wake-up time.

The Galaxy S7 Edge houses non-removable Li-Ion 3600 mAh battery and comes with Quick Charge 2.0 that charges your phone from zero percent to 60 percent within 30 minutes. It also supports wireless charging. Talk time is up to 27 hours (3G) and music play is 74 hours.

With the announcement that the LG G6 will be powered by Snapdragon 821 and the first non-pixel device that will offer Google Assistant out of the box, one can't help but compare it to Google's current flagship, the Google Pixel.