One of the most in demand superhero or anti-hero rather known as Deadpool has finally made his way to Fortnite after months and months of players waiting for this to happen! The sarcastic comic superhero from Marvel likes to get his hands in just about everything and this is what makes his character highly sought after. 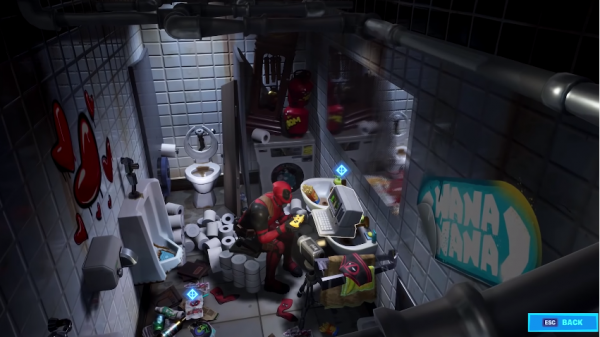 (Photo : Screenshot From CommunicGaming YouTube Channel)
[April 3 Fortnite Update] Deadpool's Back in Town! Should We Call Him Captain?

Another interesting twist to Deadpool's involvement in Fortnite is that the superhero will finally be commandeering his own place!

Deadpool has already been a part of Fortnite but only as a background chatter ever since Chapter 2 at the start of March 2020. Although he has been teased at the end of the trailer for Season 2, the players have soon found a way into his hidden restroom HQ found in the game's menu.

Dataminers have been circulating talks after uncovering files that suggest that players (or maybe at least Battle Pass owners) will then be able to unlock the most awaited Deadpool outfit if they successfully complete specific challenges.

Deadpool could not wait

Deadpool has decided to announce his own arrival on April 3 after too much circulating rumor must have annoyed him. The character said himself last April 2 on his official social media accounts that "Starting tomorrow [April 3], I'M crashing this party," which has fans of both Fortnite and Deadpool all riled up!

The message even suggests that Deadpool himself will be commandeering a yacht for the intriguing occasion filled and completed with both music and tacos! So far, this marks the second crossover with the 20th Century Studios property in a short order right after the March 31 update from Fortnite that included bullet-defecting, swordfighting umbrellas made popular by the Kingsman franchise.

Read Also: Couple Exchanges "I Do" in Animal Crossing: New Horizons As the Coronavirus Cancels Their Wedding

20th Century Fox has just been acquired and renamed to 20th Century Studios back in January 2020 by no other than Disney. Since this acquisition, Disney has been understood to have started recommencing work on the upcoming third franchise entry according to comments way back December 2019 by the series star, co-writer, and producer Ryan Reynolds himself.

Fortnite's free-to-play game is already available on PlayStation 4, Xbox One, PC, iOS, and Android as well. The game gets its revenue from the optional in-game payments on certain cosmetic items as well as the seasonal Battle Pass which is a good deal for players who are willing to spend and also players who aren't.

The upcoming Chapter 2: Season 2 is well expected to be concluding on April 30, 2020 which has made the introduction of Deadpool an incentive for those who purchase the Battle Pass even though it expires a few weeks afterwards.

The fans of both Deadpool and Fortnite together have quite a lot to look for as captain Deadpool makes his way to his yacht enjoying the good life while blasting music and filling his stomach with tacos tacos tacos!