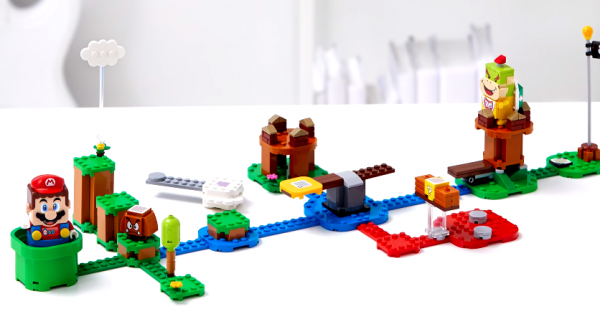 (Photo : Screenshot From just2good Official YouTube Page)
[August 1] Save The Date For The New Super Mario Sets Starting at $59.99!

Lego has always been a great toy to both allow young minds to use their imagination as well as keep them entertained for hours! Fans of both Lego and Nintendo can finally see how these new "video game" but in real life elements will function!

Lego and Nintendo has also announced the prices along with the release dates for the sets and it is safe to say that fans will only need to save up at least $59.99 in order for them to get a piece of the action. $59.99 is not too bad when it comes to Lego as some of their sets can cost even more expensive than this one.

The very cornerstone of the whole Super Mario Lego sets the Adventures along with Mario Starter Course, which is the beginning set that costs only $59.99 and includes the interactive, Bluetooth-enabled Mario figure himself!

In addition to its specific smartphone connectivity, the figure also includes LCD displays on Mario's own eyes, mouth, and also stomach just to display reactions and also gameplay elements as well as a speaker for both music and sound effects.

The set also includes cool sensors which are used to detect color, movement, and even special "action bricks" that can interact with the figure in a few different ways. Mario himself is also battery-powered making him the first USB-C powered plumber!

What else does this set bring?

The base set allows players to control their very own modular course while they collect digital coins and even progress through their own Mario level going from the starting pile all the way to the goal flag located at the end. This also happens while you are fighting Goomba and even Bowser Jr. figures right along the way.

Being part of this experience, there is also a certain Lego Super Mario app that helps players keep track of their scores as well as design new courses!

Building right on the Starter Course set are the very first two Expansion sets, which add a new layer of challenges as well as characters for the players to add in their own course. The first one would be the $29.99 Piranha Plant Power Slide Expansion Set which is a notable addition you might be interested in as it adds a pair of Piranha Plants, a new Koopa Troopa, and even a new gameplay element to the entire mix!

The second addition is the largest of all three initial sets and it costs $99.99! The Bowser's Castle Boss Battle Expansion Set allows players to face off Bowser himself! Both of these expansion sets are fully modular which means that players can build out and also integrate the sets into their new courses depending on their creativity.