Tornado warnings were being issued across multiple areas in Northeast Ohio on Tuesday Evening, and even a little after midnight, a video started circulating on Twitter showing what happened as a twister settling down just a bit north of Brunswick, which is known as the biggest city in Medina County. 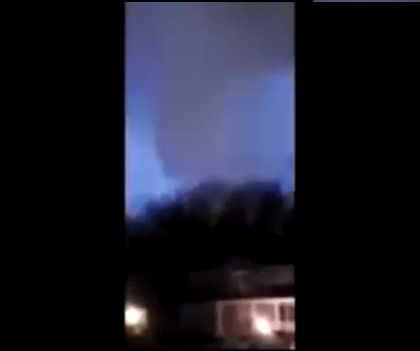 During the early parts, no funnel clouds were spotted in this dark and heavy storm, but a certain reporter of Cleveland 19 News known as Kelly Dobeck shared a video which was first filmed by Jared Svoboda on April 7, that seemed to showcase that the tornado did not in fact touch down. Dobeck then tweeted that the taken video was facing 1-71 South.

The WKYC reports as confirmed by FirstEnergy that there were over 64,000 people from Northeast Ohio who have reported losing their power at about 12:30am local time and by 1am, the number of reports had started to skyrocket growing all the way to 90,000. Although utility crews have already been dispatched to these areas, it might take a while before

The video being shared on social media

Aaron Rigsby who is known to be working for KKTV 11 News also tweeted out a map which confirmed that a twister has touched down in Medina County saying that, "Definitely a stout tube here. Right spot too since looking south out of Brunswick."

The areas that were apparently under tornado warning watch during Tuesday evening included Medina, Lorain, Summit, Wayne, and also Stark counties. The storm has been reported to produce wind gust of up to 70 miles per hour according to the NWS radar and has also caused a large hail as well as heavy rainstorms in certain areas.

Read Also: [VIDEO] The Purge Siren Being Used By In Louisiana As Coronavirus Deaths Start To Pile

Although there have been several reports regarding sever storm damage in Stark country, there have thankfully been no reports of injuries.

Cleveland.com reports that the National Weather Service themselves have predicted the severe thunderstorm to pass well through the morning. The NWS has initially predicted the tornado's possibility of going near Wadsworth located at about seven miles southeast from Medina at around 11:45pm local time. By 12am, the storm had already moved southeast with the winds moving at 45 miles per hour.

The damage being caused by this tornado

It will apparently be quite difficult to know the exact extent of the damage right until the sun rises in the morning. A local resident tweeted that "My office is in the Medina Square and it sounds like that area was hit the hardest by the tornado/storm. I hope everyone is safe out there."

Being woken up during the middle of the night to the sound of tornado sirens is already quite stressful enough, but for Medina County residents, having this happen right during the pandemic spread of the virus happened to be way too much! With hail storms raining down, the experience felt extremely apocalyptic.

While the world is facing a global pandemic, people around the area affected by the tornado still have to pick up the damage left by the tornado.