A recent trailer has just been released and it shows something really exciting for the fans of Hello Games' masterpiece No Man's Sky! It seems like the whole game gets an additional flavor in its free update which is available for PlayStation 4. 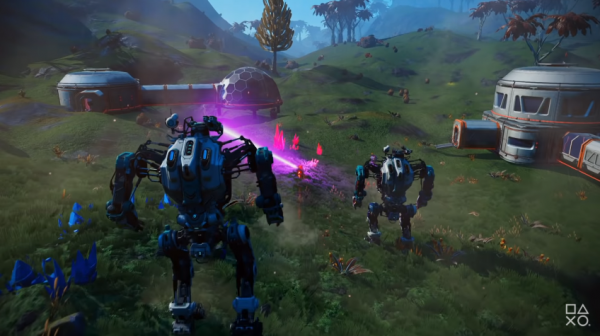 No Man's Sky still continues to keep players entertained especially during this time when people are advised to stay indoors to avoid infection from the coronavirus. The game does this extremely well by offering meaty updates on top of updates adding yet another substantial change from Hello Games.

This latest game's free update comes with an exciting name which sort of suggests its purpose as referring to its additional features while being called the "Exo Mech." This adds a really cool-looking Minotaur mech suit to the game itself! Who would have thought that robots would make their way to No Man's Sky?

A trailer has recently been released for fans to be able to see this updates gameplay and think for themselves as to whether or not it might just be the coolest thing that Hello Games has done so far. The video plays for only a minute and a half but the contents of the trailer are surely enough to keep fans excited.

These upcoming mech suits are usable inside and outside of the PlayStation VR which means that you can even hop into this mech and traverse planets from the very safety of its cockpit. Have you ever imagined what driving a tank would be like? Well, this experience is quite similar!

The mech suit is designed to be immune to all of the hazardous environments and can even mine for certain resources while piloting the whole machine! Players of the game will even be able to upgrade its mining laser into an awesome terraforming beam.

This addition comes with a jetpack as well and this should allow you to bound around different planets inside the game! If you already own a certain freighter ship, you will then be able to build new technology that in turn allows you to summon your very own mech suit to a planet's surface just like Titanfall!

Although not much has been mentioned so far, No Man's Sky actually includes a whole list of other improvements and changes on top of all that mech stuff. To see the full list of changes, you will have to go over to their official site.

The update is already available for downloading right now which means that players won't have to waste any time waiting to check out this cool mech suit! Before playing the free updated version, you might want to check out the video and excite yourself a little bit as you commence the download.

Hello Games has done an excellent job with No Man's Sky by bringing mechs to the players arsenal.