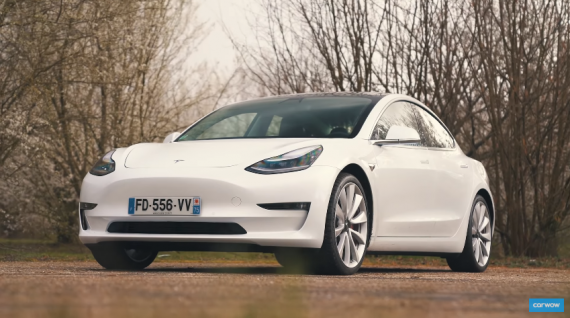 Tesla CEO Elon Musk finally gives a little bit of insight into why the automaker's Model 3 has an equipped in-cabin camera. On Twitter, Elon Musk off-handedly confirmed why the cabin-facing camera (which was originally part of the Model 3's previous design) will be a huge aid to the company as they aim to turn these cars into future robotaxis.

The confirmation given by Elon Musk

Elon Musk's confirmation came in response to the questions surrounding the research on the mysterious cabin cam that shows exactly what it sees. In a specific tweet, one user was hypothesizing that the camera could most likely be for future Robotaxis stating that if future vandalisms may occur inside the car, the camera will catch the act and the vandals will pay for the damage and even possibly get charged criminally.

Elon Musk simply tweeted a short "correct" in response to this hypothesis. Theoretically, the camera would then enable anyone who chooses to use their car as a robotaxi to monitor what the passengers inside are doing in an event that any form of damage was done to the interior, owners could then hold the passengers liable to the damages.

About this very time last year, Tesla promised the public that it would then have one million robotaxis (autonomous vehicles that can carry around passengers driverlessly) by the year 2020 but with unforeseeable events happening around, the certainty of this unveiling in 2020 is questioned.

Although the goal may seem a bit unrealistic for quite a number of different reasons, Tesla has made a few steps towards the materialization of its mission by building its very own chips for the robotaxis which are now being installed in all Tesla cars. This means that in the far future, any of the company's vehicles could then be converted.

The future of Tesla

Thouch Elon Musk seems to have already confirmed that Tesla's in-cabin camera will then be used to able monitor robotaxis when they are officially on the road, sustainable transit blog, Electrek, has suggested in addition that the cameras could actually be useful for a few other things.

Electrek specifically suggested that the camera could also be used in the future to monitor the driver's attention when passengers have the new "autopilot" feature activated. This could also potentially improve safety and make sure that drivers are not using the autopilot feature which is still not yet declared safe.

Tesla has also applied for a specific patent that would then allow the use of computer vision technology in order to recognize the passengers when they enter the car itself. From there, the vehicle would have then automatically applied certain settings for those who share a single car.

The future of Tesla always includes innovation and although most automobile companies would like to take things slow, Tesla somehow tries to speed up the process of bridging the gap between now and the future.