Tarvaris Jackson Died in a 2012 Chevrolet Camaro: Here's What You Need to Know about the Former NFL Quarterback's Car Crash 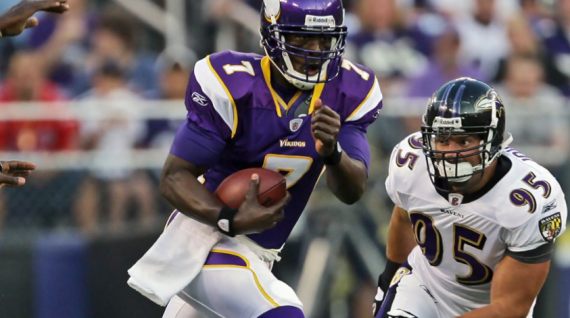 It was reported by a spokesperson for the Alabama Law Enforcement Agency to CNN that Jackson was killed while driving a 2012 Chevrolet Camaro saying that his driving "left the road, struck a tree, and overturned." Which is not a pleasant description as to this football player's death.

Tarvaris Jackson's death and what he leaves behind

Tarvaris Jackson is known to be from a former Minnesota Vikings and Seattle Seahawks quarterback before he joined the Tennessee State University as the Tigers' quarterback coach in 2019 and his career is quite colorful. His death came as a shock as the former NFL quarterback was transported to the hospital where he was then pronounced dead. The crash was reported to have happened about 7 miles south of his hometown, Montgomery.

The Minnesota Vikings official page said on Twitter that the entire Vikings family is now saddened by the news of the loss of Tarvaris Jackson and that everything happened way too soon. The Tweet then then said that Tarvaris' greatest attributes was the positive outlook and approach he had. The Tweet said that his care for others was genuine and that he was a good friend and will be dearly missed by teammates, family, and even Vikings fans everywhere.

Jackson had previously joined Tennessee State University as the Tiger's very own quarterbacks coach in 2019 right after coaching for his Alma Mater, the Alabama State, for about a year. During his whole 10-year career with the NFL, he was able to accumulate 45 touchdowns in total.

Jackson now leaves behind his beloved wife Lakitta along with three children, Tarvaris, Takayla, and Tyson.

During the time spent with the Vikings, Seahawks, and even a one-year stint with none other than the Buffalo Bills, Jackson has been said to have made a long lasting impression on his friends, teammates, and even coaches.

Jackson's former teammate named Russell Wilson expressed his sentiments in a Tweet by saying "TJack. . . you will be missed. Praying for your family. . .Love you man," which is just one of many other tweets honoring this former NFL quarterback.

The head coach of the Seahawks Pete Carroll has also given his sentiments on Twitter by saying that "Tarvaris Jackson was a beloved teammate, competitor, and Seahawk," the coach says that the former NFL quarterback will be deeply missed as he expresses the heartbroken feeling that the news has brought as he sends his condolences to Jackson's family and friends.

Another former teammate by the name of Chad Greenway has also said that "TJack was one of the best teammates and friends. Drafted together in 06' and he will be missed."

Toyota, Nissan, and Dodge. Here are three of the safest used cars that cost just around $9000

Car makers in the United States are experiencing a precipitous downhill drive with U.S. car sales in April dropping by about 4.7 percent. This market slump has been going on for four straight months.

The Chevrolet Camaro has been a classic that is still one of the favorites of enthusiasts. Its 2017 edition is a refined version of the established standards.