Contract Tracing Apps Could Be A Way to Reopen Society, But There's a Downside 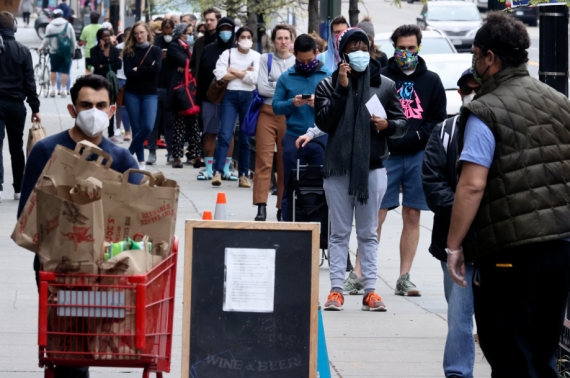 Shoppers keep a social distance, during the coronavirus disease (COVID-19) outbreak, as they wait in line on the sidewalk outside a grocery store in Washington, U.S., April 14, 2020. (Photo : REUTERS/Jonathan Ernst)

According to an article by Rappler, digital "contact tracing" would allow the mobile systems to log various instances where people have been within close proximity of an infected person and send the alerts to the appropriate individuals.

Researchers as well as health agencies around the world have already been ramping research on different potential solutions, which could also get a boost from a joint initiative by both Apple and Google to make tracing even more effective.

The idea is that people would be able to download certain mobile apps and update their own COVID-19 status should they be infected. The app would then rely on Bluetooth to determine if any other users had crossed paths with a certain infected person.

There have already been a few research teams that are developing this system, and at least one of them has already been used in Singapore. This app would then alert those individuals giving them a notification to self-quarantine.

Collaboration with both Apple and Google could make this app much easier to produce. According to a research scientist of the Massachusetts Institution of Technology who is currently working with over 30 government as well as health agencies on contact tracing Mr. Francesco Benedetti, the smartphone system could even effectively replace the lengthy "manual" tracing which is currently done by interviews handled by medical staff.

The limitations of this technology

The first problem with this contact tracing plan is that people need to own a smartphone, download an app, and consistently update their status. According to a researcher as well as co-founder of the volunteer group known as the Covid Watch, some experts already suggest that 60% adoption could actually help this pandemic ease down.

Tina White is currently working with Oxford University scientists to help them develop the app. Benedetti also said that the tracing app could still have a "high impact" as high as 40% adoption, but the effectiveness of this app would still depend on other safety measures implemented.

Another possible problem would be the app be "open to trolling" according to scientist Ross Anderson of Cambridge University. According to Anderson's blog post, "The performance art people will tie a phone to a dog and let it run around the park."

Researchers claim that contact-tracing can be implemented while also protecting the privacy of the user but it really depends on the specific apps being developed in each country. The MIT researchers have even said that they are determined to avoid the whole "Big Brother" element which is used in some countries.

According to John Verdi of the Future of Privacy Forum which is a Washington based research group, the Google-Apple system appears to have "safeguards in place to mitigate tracking and re-identification use cases. They appear quite strong."

Not a lot of people are optimistic about this idea and there is still a lot of discussion to be done before this possibility is implemented.