[VIDEO] GoPro That Survived Creeping Lava Captures Amazing Footage of What it's Like to Be Melted! 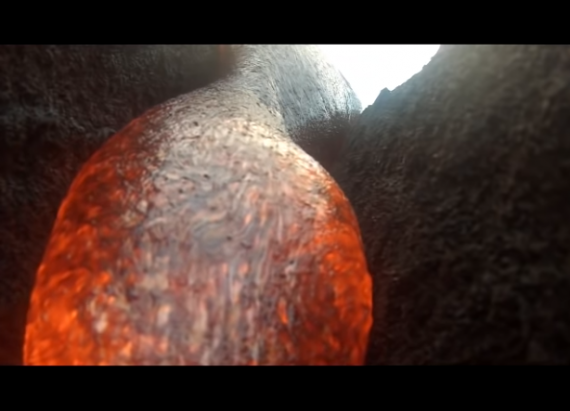 [VIDEO] Curious What Getting Melted by Lava Look Like? GoPro Brings Back Amazing Footage After Surviving (Photo : Screenshot From PetaPixel YouTube Channel)

A particular environmental exploration guide named Erik Storm apparently left his GoPro in slow motion as crawling lava started to engulf the camera! What's even more surprising is that the GoPro actually survived this and brought back surreal footages of what it's like to be melted by lava!

Erik strategically placed his GoPro inside a really small crack in the ground in order to get images but the fiery madness started to eat his GoPro alive! The lava suddenly sank in through the crack and swallow his camera that had a protective casing that time.

How on earth did the camera survive?

While watching the lava creep closer and consume the camera, it would be easy to assume that the camera was destroyed by the lava! Even Erik himself thought that he had to bid his camera goodbye but it turns out that the GoPro survived!

Once everything was safe, Erik then started to smash through the cooled rock in order to recover his beloved camera. Although the exterior of the camera was a little melted, the GoPro was still intact! The SD card inside had miraculously survived the extreme temperature.

After retrieving the GoPro, Erik was able to take a look at the SD card and found out amazing footage of what it's like to be consumed by lava. The hellish video is quite interesting because of the way the lava crept in as the fire started to torch the camera.

The final condition of the camera

Although the GoPro is now unable to work properly or function as it once did, just the fact that it had been intact even after being engulfed by lava is amazing! Although there has not yet been any scientific findings regarding how the camera survived, it's most likely that the plastic case was strong enough to take the heat from the scorching lava for a short period of time!

The camera might not be able to be put into good use the next time it's brought out but it does make for a good souvenir as a camera that was actually able to survive lava itself! Erik's plans for the camera are still unknown but it is a good thought to think that somewhere out there, this legendary camera sits on a throne on display for Erik to tell the story.

This situation has not yet been recreated so it is not yet really safe to say that each and every GoPro could survive the extreme temperatures as lava until somebody is daring enough to give this experiment a go. Another set of experiments would still have to be done in order to declare that each and every single GoPro is able to withstand the extreme temperature of lava.

This GoPro is one of the amazing stories circulating not just the camera but photography itself. This has been the first instance ever that the insides of lava were captured on camera.

Read Also: [Instagram Video] Cute Husky Seen Being Walked by Drone: Could This Be the New Norm for Doggo Walking?

Ever wondered what an insect sees? Well, these engineers have created a camera that you can ride on top of insects.

What's going on with the Hero8 GoPro?