The coronavirus infection has been spreading at a tremendous rate since its initial stages, and the world is battling desperately to slow down the disease. Here, images of how the virus spreads through an airplane cabin from a simple cough remind travelers of the severity and difficulty of controlling the spread.

The team from Purdue University that created the images displayed how pathogens can readily travel through the air and, more often than not, farther than most would expect.

The images shows how saliva droplets from its initial host, create a dense cloud of germs which, when exposed to the open air will quickly spread out and cover a wide area in a short amount of time. 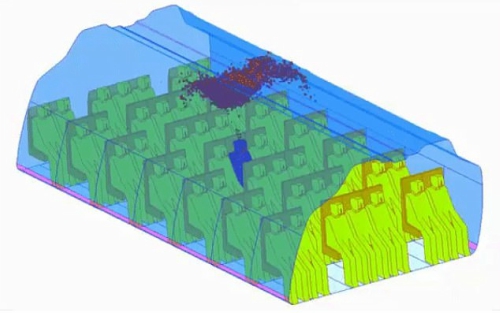 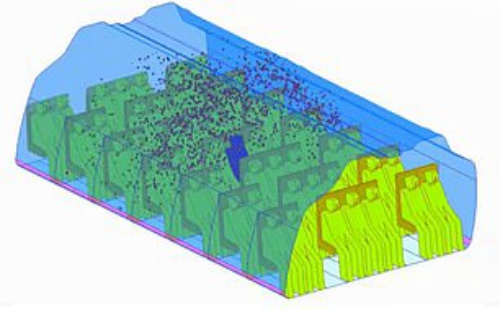 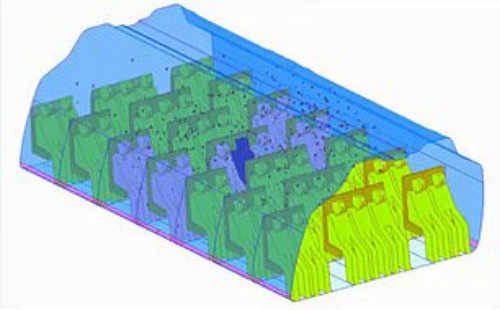 Ten people who were near the initial host were classified as high-risk even though the bacteria spread to every corner of the cabin.

The simulation reveals how airborne pathogens behave and reside in the open air, but experts are still unsure if the new coronavirus fits into this category.

Evidence reveals that pure droplets from an infected host may be spread throughout an open-air area or air-conditioned structure.

The experiment falls in line with a study by the US officials that showed one single infection could spread quickly to 43% of their contacted persons in South Korea.

The gif was made in 2014 by scientists to reveal how air-based pathogens spread and move through open-air or air-conditioned rooms.

Qingyan Chen, along with his associates, stated that several infectious diseases could inflict significant social and economic disruption if left untreated or alone due to how quickly they can spread from one host to another.

The model of the simulation was based on the assumption that the 2003 SARS disease was airborne.

It reveals how discharges from an infected person can linger and spread quickly throughout a wide area.

The World Health Organization (WHO) stated that the coronavirus is spread through large droplets from the host's respiratory system.

The large droplets are more massive and therefore have reduced distance after expulsion to linger in the air. This is the main reason for having a social distancing guideline to prevent the spread of the virus.

Read Also: Birds of the Same Feather: See These Two Widowed Penguins Support Each Other With A Comforting Hug

Even though the COVID-19 is more challenging to pass through via open-air, evidence suggests that it is still possible and that air-conditioning systems have a hand in increasing the number of infections of the virus.

One study by scientists from the US reveals how resilient the virus is by lingering in aerosol and maintaining its infectious characteristics for up to three hours.

The WHO, however, argued against the results as not being natural and an inaccurate depiction of how an actual situation would happen.

An increasing number of reports suggest air-conditioning aids the virus in staying airborne and spreading around a larger area than they would usually have.

One report by the Centers for Disease Control and Prevention (CDC) on April 2 delved on how a cluster of positive cases from Guangzhou, China, was allegedly the result of air-conditioning spreading the coronavirus around.

Ten people from three families tested positive for the virus after dining in the same restaurant, and researchers concluded that the droplets were not enough to cause the overwhelming number of infections.

Jianyun Lu's team theorized the transmission of the virus was assisted by the restaurant's air-conditioning system, which accelerated and increased the range of the disease.

Read Also: [VIDEO] Stunning Angel Of The Sea Caught Hovering Under the Ice By a Professional Photographer