The gigantic planet Jupiter is home to severe thunderstorms and ferocious atmospheric weather. It contains thunderheads that reach forty miles in the sky and half as vast as a continent. A fitting demeanor for its name based on the Roman god of sky and thunder.

With more than four centuries of scientific observation and study, the planet's massively inclement and continuously-changing weather and atmosphere remain largely a mystery.

A project was launched that consists of NASA's Hubble Space Telescope, the Gemini Observatory, and the spacecraft Juno, all of which scientists will utilize to study the elusive giant's long-held secrets carefully.

The team of equipment will allow experts to probe deeper into the cause of Jupiter's hazardous conditions by investigating and mapping out certain phenomenons, which include figuring out the nature of the Great Red Spot, which is a unique feature that can be seen on the planet. 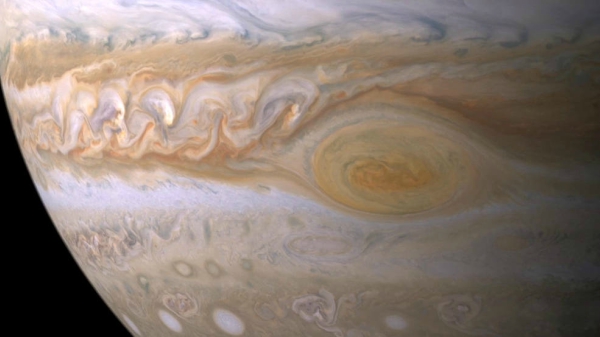 Having each other to cover areas that one cannot monitor alone, enables experts to more evidently observe and monitor the weather and properties of the atmosphere. The endeavor is set to reveal new information behind the inner workings of the planet.

The collaboration of the three will be monitoring the spectacle that is happening more than 500 million miles away from Earth. The team consists of Michael Wong, the leader of the project, along with Amy Simon and Imke de Pater.

The astronomers will be putting together several multiwavelength observations acquired from the Hubble and Gemini along with Juno's close-up views to create new insight on the monstrous planet's crazy weather.

The Juno spacecraft dives low near the massive planet every 53 days detecting 'sferics' and 'whistlers, both of which are radio signals and are used in mapping lightning that occurs on the planet at all times.

Each event that Juno moves close, Hubble and Gemini will be observing from a distance and taking high-resolution photographs of the planet's overview in an attempt to compare them with the close-up photos of the spacecraft.

An answer to centuries-old questions

The researchers have found out that Jupiter's lighting outbreaks are related to a combination of three cloud structures: deep clouds that are made of water, large convective towers caused mainly from the upwelling of moist air called Jovian thunderheads, and bright regions allegedly caused by downwelling drier air.

The combination of distanced-observation and close-up views allow experts to dissect every bit of the storms and what other factors are affecting them. A detailed explanation of the findings can be found on NASA's report written on Hubble's website.

Wong and his team are making their research findings public and easily accessible to other researchers. The data will be open to view through the Mikulski Archives for Space Telescopes (MAST).

Wong believes their research was able to provide support to the Juno mission as it is a crucial part of the observation that led to the marvelous findings which were published in The Astrophysical Journal Supplement Series.

Read Also: The Moon Like You've Never Seen It Before As Astrophotographer Meticulously Combines Multiple Lunar Phases Into One Beautifully Clear Image