The Cassini spacecraft was launched in 2004 and was designed to monitor Saturn and its behavior. The final voyage was made in its last approach to the ringed planet on September 15, 2017. The observations it captured, however, will be used in the study of the planet and how its weather and atmosphere work.

The vast range of meteorological events happening on the surface has been the talk of astronomers for many years. The primary concern with this is the unique "hexagon," which is the defining feature of the planet and can be found in its polar region with near geometrical perfection.

Mathematical and cosmic at the same time

The first sighting of the phenomenon was during NASA's 1980 Voyager 1 and 2 spacecraft missions and has continued to be monitored since then. With the planet's long and strong cycle of seasons, the hexagon has remained mostly static in its movements.

The weather within consists of a fast, narrow jet stream where winds tend to reach a maximum speed of approximately 400 km per hour. Which begs the question as to why it keeps itself locked in place consistently without shifting concerning the rotation of the planet.

All of its features and mysteries have landed itself among the top attractive unknowns in the scientific community, but Cassini may be threatening to crack its case now.

During its endeavor, the Cassini spacecraft has taken an immense number of photographs ranging from up-close and personal, to extensive, world-distance views.

June 15 marked its capture of high-resolution images of the planet's limb using its primary camera while capturing the hazes located on top of the clouds that outline the hexagonal wave.

The composition of the hazes were also determined using different color filters, such as ultraviolet and near-infrared. The findings, coupled with the images caught by the Hubble Space Telescope 15 days later, showing the hexagon as viewed from above.

The underlying science behind the phenomenon

Leader of the study, professor Agustin Sanchez-Lavega, said that Cassini images have allowed them to discover that the hexagon contains a multi-layered system of mists, at least seven to be exact, that stretch from the top of the clouds to more than 300 km above them. 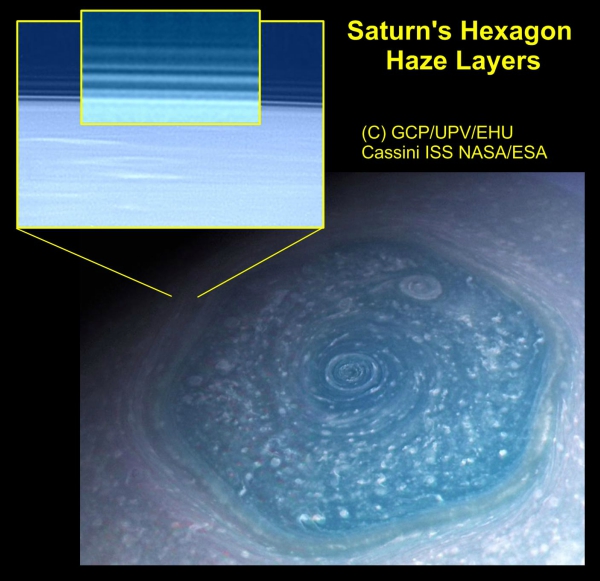 Other cosmic bodies that are cold also have this feature of haze layers, but to this extent was a first of its kind to be discovered.

Each layer of haze extended vertically between 7 and 18 km approximately and was found to have minute particles with one-micron radii. The low temperatures of the planet have led to the composition of hydrocarbon ice crystallites in Saturn's atmosphere, such as acetylene, propyne, and other gases.

One hypothesis in the study also focused on the regularity between the vertical distribution of the hazes, which states that the hazes are arranged by the vertical propagation of gravity waves that disturb the atmosphere's density and temperature by producing oscillations.

The team is led to believe that this process is the core reason behind the structure of the hexagon and its constituents. The gravity waves scenario also appears on Earth as they produce jet streams that travel at speeds of 100 km per hour eastward near the mid-latitudes, though comparisons are still subject to further study by the team.