NASA Kennedy Space Center's official Twitter account announced its approved launching of SpaceX's Falcon 9 last May 19, 2020. The Crew Dragon, consisting of astronauts Bob Behnken and Col. Doug Hurley, was supposedly flying the Falcon 9 spacecraft into space on May 27, 2020 at 4:33 PM in Florida, USA. Unfortunately, due to the bad weather, the historic launch was moved on May 30.

This is the first time in nine years since the U.S. launched a human-operated spacecraft into space. To honor and commemorate NASA's newest spacecraft launch, mothers have dressed their babies and kids in adorable astronaut costumes to celebrate this historic day.

On Facebook, there is a public group called SpaceX. This group is a fan page area where astronomy enthusiasts can discuss and share anything related to space technology.

Just recently, a woman by the name Priscilla Reyes posted pictures of her daughter wearing an astronaut costume in the SpaceX fan page group. The pictures looked to be professionally taken and props such as prototype models of spacecrafts and rockets were used as background decoration. 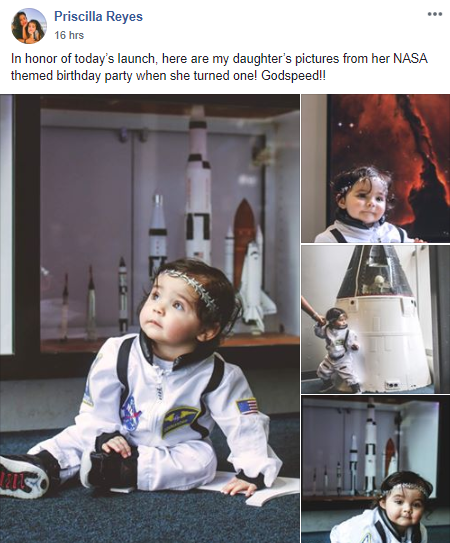 Another woman, Estrella Martinez, posted recent pictures of her son wearing an astronaut costume in the SpaceX fan page group. The caption of the post stated that the mother-son duo was at the site of the Falcon 9 launch and was watching live. The pictures closed upon Martinez's son and one can see the general background of the images as to be a launching area. 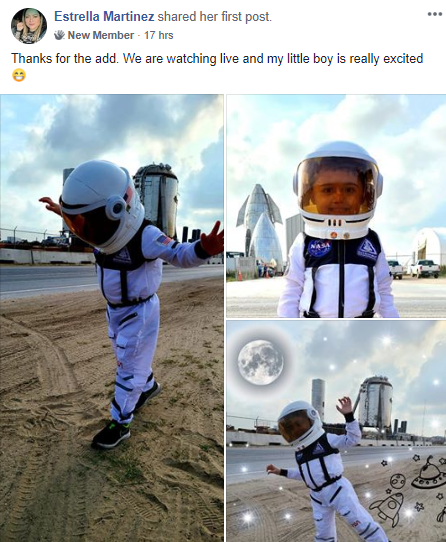 People have also expressed the pride they feel towards the launching of the Falcon 9 in every social media platform. People in the U.S. have anticipated the launch of the Falcon 9 ever since its official announcement by NASA in their official Twitter accounts.

Despite all the pride and joy people have felt towards the launch, NASA announced just hours ago that the Falcon 9 would not be launching on May 27, 2020 at 4:33PM. The weather conditions of Florida, at the time of lift-off, was not suitable for any space vehicle launching. The Falcon 9 launch will now launch on Saturday, May 30, 2020 at 3:22 PM. The journey of the Falcon 9 launch will be covered starting at 11 AM on Saturday.