Are you an Alt or Straight Tiktoker ? What if Your Both? Take The Quiz! 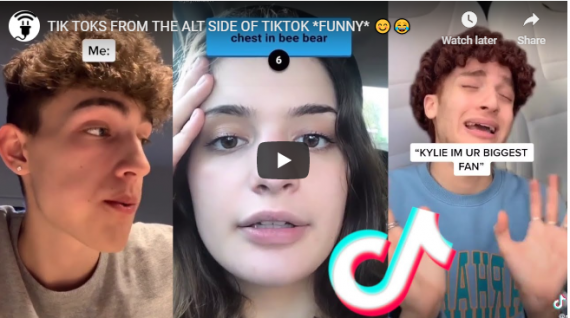 Tiktok. The mobile app that has became a worldwide phenomenon. Anyone who's anyone has definitely heard about it. Ever since half of the world was placed on lockdown, people became bored out of their minds that they decided to explore some new things that might kill time.

From baking to exercising at home to attending online courses at Ivy League schools to bingewatching Netflix series by your lonesome self, Tiktok has found its way to becoming one of the top things to do when you're stuck at home and has become viral over time.

But recently, another version of Tiktok has appeared. And no, it is not a mobile app that can be found in the Play Store or Apple Store, rather it is a subset of TikTok that focuses people who make fun of people who can be classified as "straight TikTokers".

"Straight TikTokers" refer to people who use the mobile app way too much, especially the dancers and shirtless thirst trap videos.

The War Between Straight TikTokers and Alt Tiktokers

To put it bluntly: Alt TikTok is for weird people. Their sense of mocking the mainstream TikTokers is funny in a manner that cannot be thoroughly explained. Basically, Straight TikTokers don't like being identified as such as they think it's an insult to them whilst Alt TikTokers aren't as popular as the mainstream ones.

If you want to find out what kind of TikToker you are, there is an Alt TikTok quiz that you can take that helps determine whether you're straight or you're TikTok-weird.

The Biggest Names in TikTok

TikTok combines Musically and Vine which perhaps is the main reason why people are hooked to it so much. You'll be amazed that the biggest stars in TikTok are not celebrities (i.e. Will Smith and Dwayne Johnson are the 15th and 16th most-followed accounts, respectively). They are just ordinary people who happened to be extremely talented at using the platform's features to their advantage.

The most-followed person and perhaps the youngest TikTok star is none other than16-year-old Charli D'Amelio. Despite the fact she has only been using the platform for less than a year, she has a total of 58 million followers, and an estimated 4.1 billion likes over her videos who has 58 million followers, over 4.1 billion likes. Her fame and reuptation has allowed her to star in a Super Bowl ad and received numerous offers to perform (such as the NBA All-Star Game).

Trailing behind at second place is Loren Gray, who has 43 million followers and about 2.5 billion likes.

Whether you are a straight TikToker or an Alt TikToker, the platform has a place for everyone to share whatever content they feel like sharing just for fun, or to get a good laugh.

[Net Worth] How Much Money is Charli D'Amelio Making This 2020? She Shares a Few Tips

TikTok expert Alessandro Bogliari explained that Charli's rise can really be attributed to the perfect storm of elements: a little bit of luck, the right timing, consistency, and TikTok's algorithm.

How to Make a Profit on TikTok: Social Media Influencer Shares Money Hack

What was previously just thought of as a "teen fad" now has celebrities and other big-name entrepreneurs like Gary Vaynerchuk declaring the power of TikTok.

A group of ambulance workers attempted to do the "coffin dance" on TikTok and were met with backlash. Check out the video!

Perfect symmetry can be pleasing for some things but when it comes to the human face, a doctor