The VFX artists of the HBO TV series Watchmen have unveiled the secret to how they created the mask of Looking Glass. 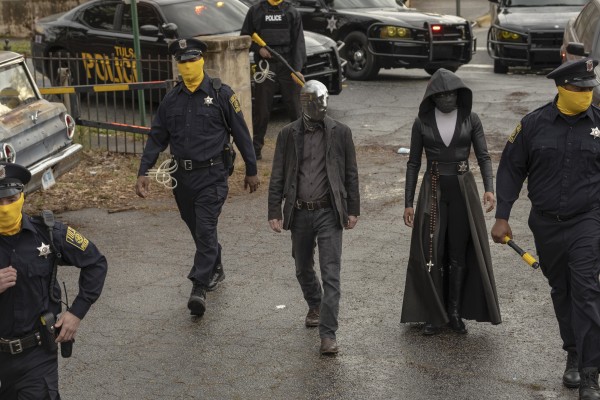 The VFX team had a challenging task when they had to make it so that Tim Blake Nelson looked like he had a mirror wrapped around his head.

Damon Lindelof, the showrunner of Watchmen, tasked Erik Henry and his VFX artist team to accomplish the mirror that wraps around the face of Looking Glass.

The Process Behind The Mask

Initially, the plan was to ask one of the costume designers of the show, Meghan Kasperklik, if there was a material in the real world that could get the effect they wanted. However, much to their distress, they would need to be inventive to get it right.

Erik Henry explained how they created the Looking Glass mask in an interview with IndieWire; here is a summary of the process.

Henry and the VFX team came up with a mask made with CG, which meant that they would have to shoot scenes two times. The first time for the performance of Looking Glass, while second time is for everything that's reflected in the mask.

However, they knew that production wouldn't allow them to reshoot one scene twice for a mask. The VFX team tried using GoPros on a headlamp wrapped around the head with an elastic band, but it wouldn't be stable, and that blurred all the footage.

Henry and Damon decided that they would make the mask have wear and tear. It led to a mask that had some flaking on its surface, and it would look like you were looking at a silkscreen shirt that's been stretched. It looks real in a few shots, especially when there's a closeup.

The first time Blake wore a mask on the set, the mask was made of green screen material, but then they decided to change it into a mo-cap kind of style gray fabric with geometric shapes dotted all over it for the latter half of the shoot.

Many Processes That The Mask Entailed

In the interview, there's even more information about the processes surrounding the mask. The processes include the VFX team having to search for the perfect camera so that they could capture the world from a certain vantage point and to let the people behind the CG manipulate the mask and such to make its effect more realistic.

No matter how they decided to do it in the end since, it worked excellently. The majority of the show's watchers hadn't realized that the mask wasn't real until the show reached its conclusion. Nelson has been on the record since the show concluded, and he has said that Watchmen has resonated. He had a ton of fun playing Wade, even if he had to have some prop mask or whatever solution they had on his face for almost the entire time.