Mercedes-AMG, the high-performance subsidiary of Mercedes-Benz AH, has unveiled what looks to be the most powerful of their models. 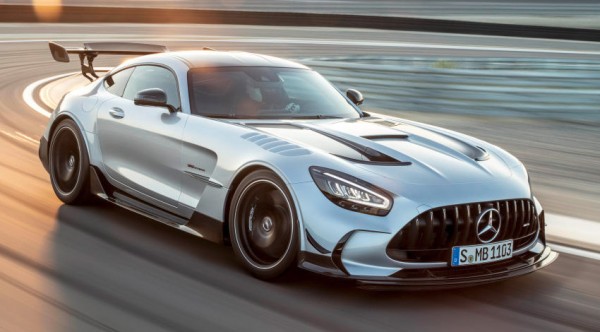 With specs and design of the new model that makes the GT R Pro look basic in comparison, the 2021 Mercedes-AMG GT Black Series seems like it was meant to be the rival to the 700-horsepower Porsche 911 GT2 RS.

What Makes It So Good?

The central focus of the feature set of the Black Series, which serves as a direct upgrade over the rival Porsche mentioned above, is the 720-horsepower, 4.0-liter, flat-plane crank, bi-turbo V8 engine.

Aside from the less noise output, the flat-plane crank configuration will also bring a smoother delivery of power, higher torque at low revs, and an improved throttle response. If you're worried about the quality instead of quantity, know that this is the most potent AMG V8 released to the public.

The 590 pound-feet of torque available from two thousand to six thousand rotations per minute will come from the new exhaust manifolds, new camshafts, a larger intercooler, and bigger compressor wheels in the turbos. With all the torque going into the rear wheels via a seven-speed dual-clutch transmission brings the speed from 0 to 60 mph in 3.1 seconds.

The Black Series can reach 124 mph in under nine seconds, and the top speed is 202 mph, which is a speed that AMG states are only sensible to reach when in a closed-off racetrack. It would be best if you weren't going that fast out on public roads either way.

How Does The Car Look?

The car's design is as extreme as the internals for better or worse, which might be a good or bad thing depending on who you ask.

The car has a catfish-like grille that's larger than regular grilles, which makes it seem like an AMG GT that was designed to look similar to a Honda Civic Type R. But in actuality, it is designed to be similar to the AMG GT3 race car from the company. All over the car, you'll find temperature-regulating and downforce-creating vents, finds, and wings.

The roof, actively-adjustable rear spoiler, manually-adjustable front splitter, and the rear hatch use visible carbon fiber. On the other hand, the front sway bar, transmission mount, and shear panels use less visible carbon. The carbon torque tube that connects the rear axle to the engine is about 40 percent lighter than the carbon torque tube found in the regular GT.

A set of 19-inch wheels at the front and 20-inch wheels at the back connects the AMG to the tarmac, which has two variations of Michelin's Pilot Sport Cup 2 R tires you can wrap it with were made especially for the Black Series. One of them is made of a compound that's harder and lasts longer, while the other has maximum grip thanks to a softer rubber.

Things are kept where they're supposed to be thanks to the coil-over suspension with adaptive damping and adjustable spring preload. If you're wondering about it, there's also the standard ceramic brakes.

The official price and how many will be produced haven't been announced so far, but don't expect the Mercedes-AMG GT Black Series to cost less than $200,000 since that's how much the GT R Pro cost.

Read More: Does Nissan's New Electric Crossover Have What It Takes to Compete With the Tesla Model Y?