Lee Kun-hee, Samsung Group Chairman, passed away at 78 on Sunday with families by his side. The tech boss is also the wealthiest person in South Korea, having amassed nearly $21 billion.

During his lifetime, the controversial leader has led Samsung from a small-time low-quality manufacturer to one of the world's leading tech firms. Samsung Group now serves as home to Samsung Electronics, Samsung Heavy Industries, Samsung Engineering, Samsung C&T, and Samsung Life Insurance subsidiaries. 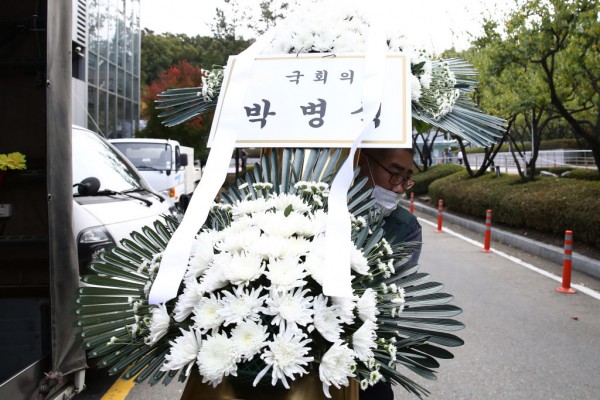 (Photo : Getty Images)
SEOUL, SOUTH KOREA - OCTOBER 25: A man carries a wreath of flowers from South Korea's National Assembly Speaker Park Byeong-seug, for the funeral of the late Samsung Electronics chairman Lee Kun-Hee outside a funeral hall on October 25, 2020 in Seoul, South Korea. Samsung Electronics chairman Lee Kun-hee,, who had transformed Samsung Group into one of the world's major tech giants from a small trading firm, died at a hospital in Seoul on Sunday at age 78, leaving a thorny succession challenge for his children.

"All of us at Samsung will cherish his memory and are grateful for the journey we shared with him," the firm said in a statement, as reported by BBC.

"Chairman Lee was a true visionary who transformed Samsung into the world-leading innovator and industrial powerhouse from a local business. His legacy will be everlasting."

The reason behind his death is still unclear, although it's worth noting that his heart attack in May 2014 left him living in care. Back in the 1990s and the early 200s, he was also hospitalized to receive treatment for his cancer.

He passed away at Samsung Medical Center in Seoul, South Korea.

The Rise of Lee Kun-hee

Lee introduced a radical reform at his company during his lifetime, infamously telling his employees, "Let's change everything except our wives and kids." Back in the days, Lee led to challenging rivaling companies, such as Japan's Sony Corp, and even made a bonfire out of 150,000 devices that didn't meet his quality standard.

However, Lee's rise to power is not always safe from the media's routine scrutny. In 1996, the tech titan was convicted for bribing the then-president Roh Tae-woo.

Everything reached its pivotal point when he stepped down from chairman in 2008 after tax evasion crime. After President Lee Myung-bak pardoned him in 2010, he eventually returned to the company.

During his absentia, his son, Lee Jae-Yong, stepped up as the chairman.

Known as Jay Y Lee, he is also one of the wealthiest people in South Korea by coming the fourth below his father. He has been considered as the de facto leader of Samsung Group during his father's absence.

In 2017, the father of two was accused of bribery and embezzlement. He was charged for the political scandal involving him and Park Geun-Hye, South Korea' s-then president.

Either way, things are not looking so good at Samsung, and the company has to somehow find a way to cope with Lee's loss.

Read also: What Happened to Google Play Music? Google Is Shutting Down Its Music Streaming Platform This Month.